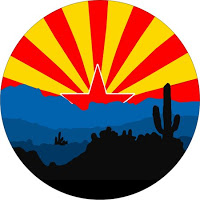 California expanded its travel ban to include Iowa because the State of Iowa refused to use taxpayer money to fund gender transition.  Am I the only one who thinks that California State Officials should boycott the entire nation and just stay put in California?
Yes, it’s true. I did live there but I fled. And now the threat of Californication in Arizona is very real.
So far, Arizona is not banned. We need to work on that. Seriously.

I know that there are reformed Democrats who drift past this blog from time to time. That’s ok. I’m not really a Republican – I’m something else, but I’m not sure what it is.

The Democrats in the media are completely off the rails, calling for rationing and privation in a country that has full employment and the highest consumer confidence in my lifetime. It’s the party of the hoax – from global warming to Russian collusion. Things are good in America and the Democrats openly wish to reverse that. It may be the only play that they have, but it’s dumb.

They wish to impeach President Trump so that they can unseat the 180 or so federal judges that he’s appointed to the bench. And it’s not that they want the miserable years of Obamanation back. That’s not nearly radical enough. What are they going to do with four more years of Trump? That’s what I hear them saying, even though those aren’t the words coming out of their mouths.