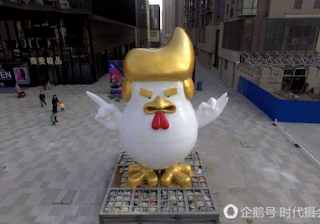 Facebook
Twitter
Pinterest
WhatsApp
Historically, China has been an expansionist power, an imperialist power. “Imperialist” was a dirty word during Mao’s long march in the 1950’s where hundreds of thousands were executed. The Great Leap Forward caused starvation of millions and the Cultural Revolution insured a backward and xenophobic China. But all that is changing as China builds a blue water navy and works to become Asia’s hegemon. Imperialism is the word of the day in China.

The engine that drives Chinese imperial dreams is economic growth and part of that is the parasitic relationship that it has with the US. The election of Donald Trump throws some of that into question but it all spins on how much short term misery the US is willing to endure (historically very little) to achieve longer term goals of more self-sufficient nationalism.

The Chinese intitiave promises improvements to rail and road networks and port and airports in all of Asia and will open new corridors for trade and investment to the landlocked countries of Central Asia. This program extends the reach of the new China farther and richer than all the Chinese empires of the past.
Lost in the boldness of the program is that it directly benefits Chinese national security as well as its insatiable demand for resources to satisfy the needs and wants of more than a billion people. It gives China a powerful voice in the national security of its partners.

The most salient example of the new strategic relationship is the China-Pakistan Economic Corridor (CPEC), which became operational in 2016. From now on, Pakistan must consult with China before undertaking any confrontation with India that could threaten the CPEC.
In accepting Chinese aid and investment, Pakistan has compromised its sovereign decision-making about threat management. It must provide security for the road and rail links under the terms of the CPEC agreement. That means that a substantial portion of the Pakistan Army must be devoted to internal security operations, along with the normal paramilitary forces. The Army has a tradition of hating that duty, but it now has no choice.
Thailand is heading in a similar direction, asking for and getting Chinese agreement to build a weapons manufacturing hub in Thailand as well as a high-speed railroad to Kunming via Vientiane, Laos. Both are unprecedented.
Control of the Ocean

China has claimed all of the East China Sea and most of the South China Sea as it’s private lake. It exercises sovereignty through regular air and coast guard/naval patrols in the East China Sea and continuing construction of and improvements to reclaimed islets in the South China Sea. Chinese forces garrison seven reclaimed and improved reefs. In December, Chinese authorities admitted they have militarized all seven. Satellite imagery confirms that airstrips on Fiery Cross Reef, Mischief Reef and Subi Reef can handle Chinese jet fighters and bombers as well as passenger and cargo aircraft.
No state has effectively challenged China’s claim to sovereignty of the South China Sea. The Chinese navy has ridiculed the US Navy’s freedom of navigation operations. The US Navy said it would begin South China Sea patrols, but the Chinese have noticed that there has been no follow up.
Unintended Consequences
One of the main ripple effects of China’s emergence is the remilitarization of Japan. The process has just begun, but Japan has adopted the doctrine of collective self-defense to cover its re-emergence as a military power to defend itself from China. Japan and India announced in November that Japan’s first arms customer is India. That is an unprecedented development.
India
China and India have been skirmishing for decades on the roof top of the world, where both claim territory in the Himalayas. As in the South China Sea, the Chinese have sent troops into Indian-held parts of the Aksai Chin area of eastern Kashmir to plant the Chinese flag.
The risk of a larger confrontation remained contained by the will of the national leaders and the difficulty of the terrain. Nevertheless, India expects to have to fight China over these remote mountain regions one day. China expects to recover areas that India “occupies.” For India to survive China’s moves on all sides, it has to make reliable friends. The US is not reliable and over time our track record is tepid at best, but Japan may work out as a good ally to India out of a sense of necessity.

BREXIT, the rise of American nationalism and a shift of the axis of power in terms of potential trade could lead to trade deals with the US/UK and Canada. They would be branded as racist, but whether or not they are, I see that as a likelihood. If France continues its shift to a nationalist posture, it might join in that arrangement.

While not a threat to China, per se, it would represent a tectonic shift in how things are arranged. The British and French each have “regional navies”, but if combined with the US, Canada and possibly Australia, India and Japan, they could create a more challenging navigation problem for the Chinese as they expand. China succeeds by absorbing its neighbors slowly and coopting them as it’s trying to do with the Philippines, but this will only happen as they are able to do what they do while selling abroad and trading.

Chinese goods, once competitive, are finding it difficult to keep up with the more impoverished third world. Chinese wages rise, the cost of living rises, the standard of living rises, and they are in the same boat as other developed nations.

I was on the telephone today (yesterday by the time this blog goes live) with a glass curtain wall manufacturer from China. They build the glass walls for high rise buildings. I’ve known the president of the company for years and she told me that China is no longer cooperative. It’s put them in a completely different place in the market. They can still dump steel and other products to keep other nations (such as the USA) out of the steel business, but the curtain walls are constructed of aluminum and that’s not being dumped. If the USA puts up trade restrictions, China will catch the flu. So will the US because everything in Home Depot, Walmart, Target, etc. comes from China… But the US can adapt more easily than China can. A sharp dip in the economy in China could result in …regime change.

Taiwan
Since her inauguration, President Tsai has refused to acknowledge the principle that there is one China, which has been the foundation of China-Taiwan relations since 1992. Chinese authorities have warned explicitly that they will use force to prevent Taiwan from declaring its independence. The Chinese Anti-Secession Act requires the use of force, if necessary, to prevent the alienation of any territory over which China claims sovereignty. This has been discussed at greater length on a previous posting here on Virtual Mirage. If Taiwan can jump ship, so can Shanghai. China can’t let that happen.