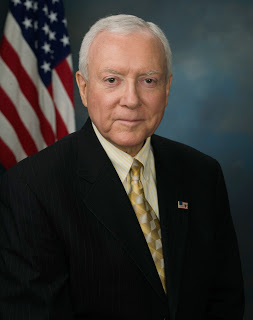 Senator Orrin Hatch will propose new legislation later this week. (LINK HERE)  He said this about that, “I continue to believe that we must do everything to properly and finally secure our border. Many of our nation’s problems result from a residual effect of a porous border and a breakdown of our immigration enforcement system. I continue to work with and support my colleagues whose states are located along the Southwest border. Of all people, they know what resources we need to deploy to accomplish the job.”

(1) Prohibits the Justice Department and Department of Homeland Security from issuing a mass amnesty to illegal aliens through the use of deferred action. Deportation cases could only be deferred after being considered on a case-by-case basis.
﻿
(2) Requires municipalities participating in Secure Communities or 287(g) to fully comply with federal immigration enforcement agents.
(3) Requires the Department of Homeland Security to create a mandatory exit procedure for all foreign visitors to the United States.
(4) Eliminates the Visa Lottery that issues 50,000 greencards regardless of the individual’s educational or economic attainment.
(5) Requires the Department of Health and Human Services to draft a document every year detailing the dollar amount of federal welfare benefits received by illegal alien households in each state and the District of Columbia.

(6) Allows states to continue receiving federal matching dollars for covering legal immigrant children and legal immigrant pregnant women, but only after the state has provided the federal government with evidence that at least 90% of its eligible U.S. citizen children and pregnant women have been covered by either CHIP or Medicaid.
(7) Requires the IRS to notify employers when there is a mismatch between an individual and a social security number, and if the employer does not act within 60 days, requires the IRS to notify the Social Security number holder.
(8) Allows authorities to charge individuals who have used stolen identities, who are also being charged with another felony, to be charged with aggravated identity theft.