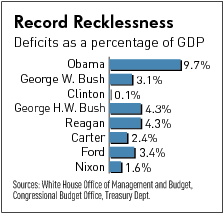 The bulk of the US Budget is comprised of entitlements doled out to US Citizens, principally Social Security and Medicare. The numbers are staggering and with the $1.1 trillion dollars in new borrowing that the Obama Administration has proposed, those programs are presently unsustainable. The US MUST adopt a system that forces government to balance the budget. Yes, that will be balanced on the backs of the American people, but they’re responsible for paying the debt back — or their children/grandchildren are.
Vice President Biden announced this week that the Obama Administration proposes to spend $53 billion over six years to construct a national high speed rail system, which will then loose money because outside of the East Coast, most people don’t ride the rails. Transportation Secretary Ray LaHood said that the administration’s ultimate goal of bringing high speed rail to 80% of the population could cost $500 billion — and it will loose even more money in operating costs, just like AmTrak. If we were solvent, I wouldn’t care. If they Administration could wrap their hands around entitlement spending, I wouldn’t care. Government wastes my money so I don’t have to. This would be another in a long series of failed projects. 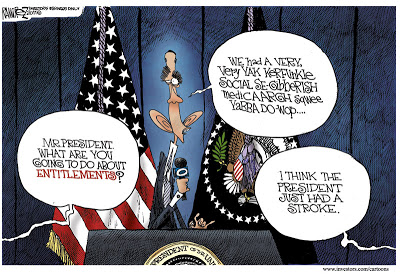 Every time spending comes up and balanced budgets rear their heads, the Administration runs for cover because they don’t want to face the reality that SOCIALISM  DOESN’T  WORK. Because it doesn’t and never has, the government needs to take President Reagan’s approach. Allow the people to create their own solutions.
If a high speed rail project had a prayer of profitability, the private sector would build it. And they’re not. Sometimes courage in public office requires that you step back from grandiose ideas such as ObamaCare and this foolish national high speed rail system. The nation is in the grip of a recession – and depending on where you live, a depression. The nation can’t tax and borrow its way out of this slump. Job creation is a function of the private sector.
Joe and Barack – show a little courage and don’t propose anything involving spending more. Courage means spending less, and taking the heat for it.