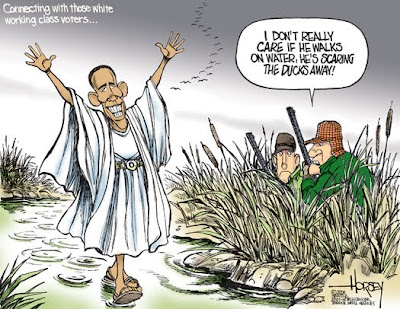 Dear Leader promised change! A change I could believe in. I didn’t vote for him because I thought he was a puffing, strutting, inexperienced buffoon. And McCain wasn’t much better in the spectrum of choices for president and leader of the free world.

He said he’d bridge the racial divide between black and white, but I’ll I’ve heard from his advisors and from his entourage is the cry RACIST or TRAITOR TO THEIR RACE.
He said he wouldn’t throw Israel under the bus. The ink didn’t dry on the NY Times front page before he stabbed the Jews in the back. Then again as America’s first Muslim president, he may have felt he had the right.

He promised that his healthcare debate would take place on CSPAN… yeah, right.
He promised that he wouldn’t push any emergency legislation without a five-day period in which he would put it to the public… that went the way of the iron horse very quickly.
However, I remain positive, waiting for a change that is worthy of comment. It hasn’t happened yet, but it might. I know there are nay-sayers out there who say that Dear Leader might not do ANYTHING right in four years. I’m not one of them. Dear Leader is able to reinvent himself. We’ve seen that (several times) and he’s not afraid to dispose of anyone who makes him look bad. When you consider the coterie of misfits, communists and political parasites who surround him, throwing a few them under the bus MUST be considered a plus. Consider ACORN. He was a community organizer for ACORN, he was an attorney on the ACORN executive board, he said many times that ACORN was his cornerstone strategy for re-making America. ACORN is shown to be a racketeer influenced and corrupt organization and last Sunday on ABC he had no recollection whether or not ACORN received federal funds… sure, we believe you Dear Leader.
I’m waiting for the Gospel (good news), Dear Leader promised.