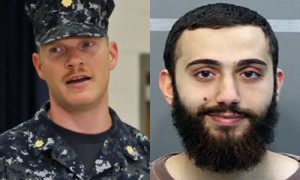 No, it’s not the last straw, but it’s really close to the last damned straw. When Abdulazeez attacked the US Military recruiting station in Tennessee,  a US Marine (deceased) and a US Naval Officer (still alive) returned fire. The Obamanation wants to see that officer cashiered.

(Allen West) As reported ten days ago by Western Journalism, “A Navy officer and Marine reportedly returned fire at the shooter who killed five service members in Chattanooga, Tenn., even though current policy does not permit military members to carry firearms on facilities such as those where the attack occurred.
“The cold-blooded assault killed four Marines and one active-duty Navy reservist. The center’s commanding officer, Lt. Cmdr. Timothy White, used his personal firearm to engage the shooter during the attack, according to sources quoted in the Navy Times. A report from The Washington Post said that one of the Marines killed in the shooting might have been carrying a 9 mm Glock and possibly returned fire on the shooter.
“At the time, Western Journalism wrote, Lt. Cmdr. White could face disciplinary action for violating policy about possessing a weapon on the facility that was supposedly a gun-free zone.”

We are going to end his career and court-martial a man who drew his sidearm to protect his command, and the assigned Sailors and Marines. The Navy should give him the Bronze Star with a V device…and would in another, saner world.

I can only hope that LCDR White used JiHAWG ammunition when he shot the terrorist, but I digress.

Please allow me to frame this in an even more disturbing way. The big effort within the Navy now is to work to lift the ban on transgender sailors serving on active duty. There is big preoccupation with that at the moment in the Pentagon with pressure from the White House to make it happen.
Thus the Obamanation is laid bare and thus the matter is made complete.
Truth: LCDR Timothy White is better off out of the Navy. It’s no place for warriors, though the transgendered and homosexual crowd can find a comfortable home there.
There’s a lot of outrageous conduct from Washington DC. 50 million babies dead, body parts for sale to the highest bidder, and a complicit government. Military officer cashiered for killing a terrorist who wiped out his command. Green light to Iran to push toward nuclear weapons, igniting a nuclear weapons race in the Middle East, etc. You wonder if there’s a limit. Every single time I think that we have reached the limit, there is more.