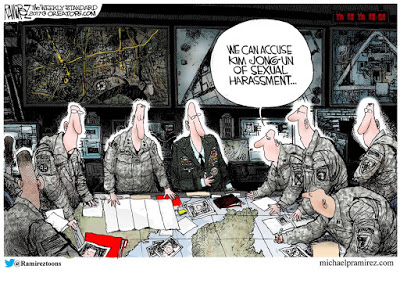 This may be the only way to get the progressives onboard in dealing with North Korea.

Dateline 1967: “LL grabbed my breast when we were on a date.” Uh, how do you respond to that one?
Justice delayed is justice denied. Sometimes you have to resort to the statute of limitations and just get on with life, but that’s not part of the progressive agenda (and that of the RINOs) who plan to use that tactic against President Trump. Sen. Al Franken (D-MN) was a sacrificial goat because none of the Dems had any use for the pompous fool/failed comedian.
A Curious Suicide

(ABC News) An acclaimed trauma surgeon was found dead with a knife in his torso Sunday in his Park Avenue apartment in a suspected suicide, New York City police said.

Dr. Dean Lorich, 54, was the associate director of the orthopedic trauma service at the Hospital for Special Surgery who treated Bono in 2014 after the U2 frontman was badly injured in a cycling accident in Central Park.

Lorich was also a professor at Weill Cornell Medical College. His death is being investigated as an apparent suicide, a New York Police Department official told ABC News.

Initial investigations did not find any signs of forced entry at his apartment, the official said. Authorities have not found a suicide note.

Police responding to a 911 call of an assault in a Park Avenue apartment at 1:05 p.m. Sunday found Lorich unconscious and unresponsive with a knife in his torso, according to the NYPD. Emergency medical service responders pronounced him dead.

(LINK) Another Hillary/Slick Willy-related suicide. They keep falling like dominoes don’t they? Don’t cross the Clinton Mafia. What do you want to bet that the “suicide” investigation will be cursory?