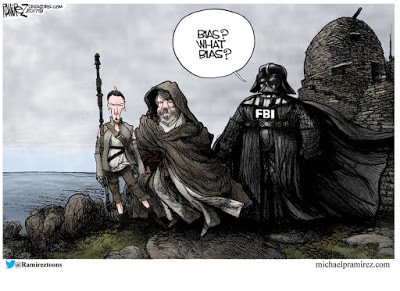 At this point, the question becomes clearer. Was it the Russians who were meddling with the 2016 elections?
Or was it the Federal Bureau of Investigation?
Which is the greater enemy to the American people?
What to do about it?
Riddle me that one.
The Deep State seems to be coalescing around the FBI at the moment, but we know that they’re not the only bad actor. Clearly the FBI picked sides in the presidential election and worked diligently to get Hillary Clinton elected. Deputy Director McCabe’s wife got something on the order of $500,000, but what was the pay off to Directors Comey and Mueller?
They clearly didn’t have America’s best interests at heart.
Nobody thought that Robert Hanssen, Deputy Director in charge of FBI counterintelligence was a Russian spy, until he was caught. He remained in place for many years, betraying the nation. What if Comey and Mueller were/are on the Russian payroll? At this time and at this point in the development of the investigation, it’s more probable than the Democrat alleged Russian collusion on the part of President Trump isn’t it?
No, I don’t think that Big Jim Comey was/is a Russian spy. But he was at the core of the problem that we have with the deep state. What to do?