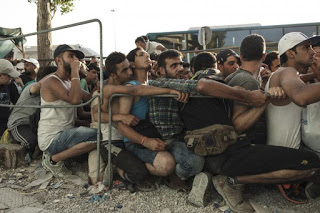 (Breitbart News) In the port city of Calais, in Northern France, a tent city was set up for refugees from Syria. Calais is the launching point to enter England from France. As the Human Relief Foundation (HRF), investigated the site, deputy chief executive Kassim Tokan, was taken aback at the waste, and that approximately 97% of the population were able bodied young men.

Tokan Reports: The young men had been burning food and clothes that were sent by charities, and complained they wanted to get to England, to live. Tokan suggested these men go back to the Middle East, in places like Jordan and Lebanon, which could offer them work and would be a better “fit”.
He said that 95 to 97 per cent of the people he observed in the camp were young, fit men – despite the BBC misleading the general public by featuring children in over 50 per of their pictures of the migrant crisis, as exposed by a Breitbart London analysis.
“They have enough food, they have enough clothes and we have seen clothes everywhere thrown. I think we need to find other places. These people come from certain countries, which are safe, everything is there, they can work, but I don’t know why they came here. 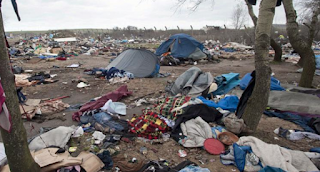 This report underlies the fears of the western world, that young Muslim men, who potentially could be advised to seek refuge in the west, could also be aligned with jihadists. Why would men uproot themselves from their families and culture to seek residency in the west? The disgusting way they have treated charitable offerings, and demanding crossing the channel into England is evidence enough these men are not who they say they are-they are not in flight.

Tons of food and survival goods were being wasted and left in mud, and at the begging of September, charities pleaded for people to stop sending goods as they were “overwhelmed,” asking for money and mobile phones instead.

So far they have not asked for small arms, armored vehicles and artillery, but who knows? I wouldn’t be surprised but what Germany provided it to them as part of their aid and relocation package. The Hungarians referred to military age males that make up the “refugee” camps as “human lice”.

As with many other situations throughout history, the oceans that divide America from Eurasia can be a very good thing.
If the Europeans want the Syrians then, they can keep them. The American response should be to accept NONE of the current hoard of military age males leaving Syria for Europe.