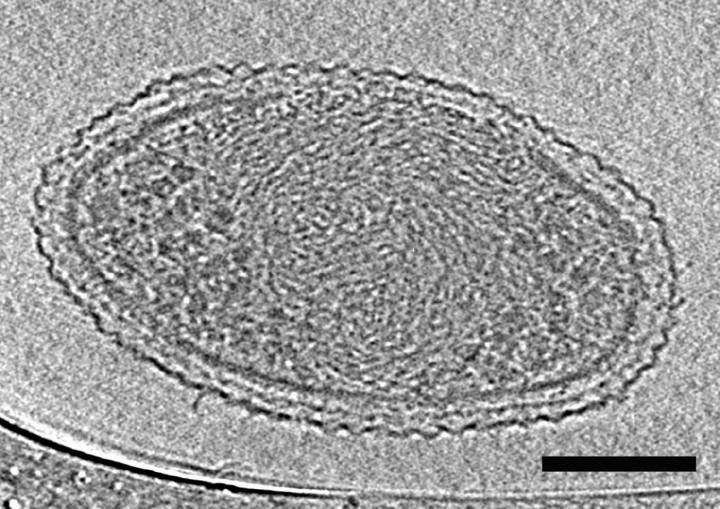 Facebook
Twitter
Pinterest
WhatsApp
Scientists have captured the first detailed microscopy images of ultra-small bacteria that are believed to be about as small as life can get. The existence of ultra-small bacteria has been debated for two decades, but there hasn’t been a comprehensive electron microscopy and DNA-based description of the microbes until now. The cells have an average volume of 0.009 cubic microns (one micron is one millionth of a meter). About 150 of these bacteria could fit inside an Escherichia coli cell and more than 150,000 cells could fit onto the tip of a human hair.
The diverse bacteria were found in groundwater and are thought to be quite common. They’re also quite odd, which isn’t a surprise given the cells are close to and in some cases smaller than several estimates for the lower size limit of life. This is the smallest a cell can be and still accommodate enough material to sustain life. The bacterial cells have densely packed spirals that are probably DNA, a very small number of ribosomes, hair-like appendages, and a stripped-down metabolism that likely requires them to rely on other bacteria for many of life’s necessities.
The bacteria are from three microbial phyla that are poorly understood. Learning more about the organisms from these phyla could shed light on the role of microbes in the planet’s climate, our food and water supply, and other key processes.

“These newly described ultra-small bacteria are an example of a subset of the microbial life on earth that we know almost nothing about,” says Jill Banfield, a Senior Faculty Scientist in Berkeley Lab’s Earth Sciences Division and a UC Berkeley professor in the departments of Earth and Planetary Science and Environmental Science, Policy and Management.

These bacteria have been detected in many environments and they probably play important roles in microbial communities and ecosystems. But we don’t yet fully understand what these ultra-small bacteria do. That’s comforting. There are still mysteries that can be explored in common ground water. There is no consensus among scientists in regard how small a free-living organism can be.

To concentrate these cells in a sample, they filtered groundwater collected at Rifle, Colorado through successively smaller filters, down to 0.2 microns, which is the size used to sterilize water. The resulting samples were anything but sterile. They were enriched with incredibly tiny microbes, which were flash frozen to -272 degrees Celsius in a first-of-its-kind portable version of a device called a cryo plunger. This ensured the microbes weren’t damaged in their journey from the field to the lab.