Holder, Up “holding” the Chicago Way? 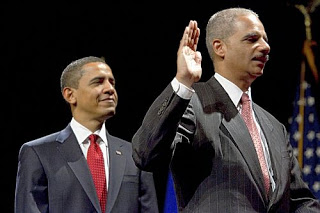 Facebook
Twitter
Pinterest
WhatsApp
The news last week, and in previous weeks about the Obama Administration doing rotten things such as using government agencies to attack their political enemies goes back to the moment that Barack Obama took office. Should we be surprised at any of this or is it simply The Chicago Way?
Attorney General Eric Holder was one of the Obama inner circle from the Chicago days too. That’s how he got the job as the top law enforcement officer in America. But what’s law enforcement in the Chicago mode if it is not underpinned by corrupt behavior and outright lies — and in this case lies not just to the American people but to Congress.
Can the Department of Justice be trusted? That means, by extension, the Federal Bureau of Investigation, the United States Attorney’s Office, the Drug Enforcement Administration or the Federal Bureau of Alcohol, Tobacco and Firearms.
Before he lied to Congress while under oath about what he knew about targeting reporters, he lied about Fast and Furious. As early as the New Black Panthers case, Eric Holder had a problem with the truth. Let’s look at the situation historically.

The slam-dunk prosecution of these thugs was dropped by Holder’s Justice Department. When asked why, Holder, on March 1, 2011, testified before the House Appropriations Subcommittee on Commerce, Justice, Science and Related Agencies on March 1, 2011 that the “decisions made in the New Black Panther Party case were made by career attorneys in the department.”

Holder lied, for the decisions were made by political appointees. J. Christian Adams, a former career DOJ attorney in the Voting Rights Section, testified before the U.S. Civil Rights Commission that it was Associate Attorney General Thomas Perrelli, an Obama political appointee, who overruled a unanimous recommendation for prosecution by Adams and his associates.

Documents obtained by Judicial Watch and a ruling by Judge Reggie B. Walton of the U.S. District Court for the District of Columbia in response to a suit brought by the group show that “political appointees within DOJ were conferring about the status and resolution of the New Black Panther Party case in the days preceding the DOJ’s dismissal of claims in that case.”

Fast and Furious
Fast and Furious was the Obama administration’s (political) program to “walk” guns across the border and into the hands of Mexican drug cartels in furtherance of its gun control agenda.

“When did you first know about the program officially I believe called Fast and Furious? To the best of your knowledge, what date?” House Oversight Committee Chairman Darrell Issa asked Holder in sworn testimony on May 3, 2011. Holder lies to Congress in response, “I’m not sure of the exact date, but I probably heard about Fast and Furious for the first time over the last few weeks.”

A July 2010 memo shows Michael Walther, head of the National Drug Intelligence Center, told Holder that straw buyers in Fast and Furious “are responsible for the purchase of 1,500 firearms that were then supplied to the Mexican drug trafficking cartels.”

Deaths of US Law Enforcement people resulted — and even more deaths resulted from people in Mexico who were killed by Obama’s guns. The response would seem to be, “you can’t make an omelet without breaking a few eggs. The Attorney General is held in contempt of Congress. What is the impact on this shocking result? Nothing. He’s still an effective tool of the Obama Administration.

Fox News/AP Scandal
Eric Holder testified before Congress that the prosecution effort to show that Fox News reporter James Rosen was a co-conspirator had nothing to do with him personally.

Holder lied to Congress. Now we know that he personally signed off on James Rosen’s warrant. The first two judges that Holder went to personally to obtain approval for the warrant refused to sign it. Finally he found a willing tool. What did he promise the judge? Nobody knows at this point, but the Chicago Way calls for a quid pro quo (bribe/favor, whatever) to the judge. Holder’s defenders say that his statement before Congress is technically correct because he never meant to prosecute Rosen, only to find the leaker. If so, then he lied to a federal judge.

Similarly, Holder’s testimony to the House Judiciary Committee that he had recused himself from the Associated Press leak investigation that led to the blanket seizure of call records is not backed up by a formal recusal letter, which is required under such circumstances.

Next week, Congress will convene to decide whether or not to charge Eric Holder with perjury (lying under oath in the Fox News/AP Scandal. If past history is any judge, they will and nothing will happen because Eric Holder is unlikely to prosecute himself…
IRS Scandal/Benghazi Scandals
There’s very little that the nation can do to get to the bottom of criminal misconduct when the top law enforcement official in the nation lies about nearly everything he does, all of the time.