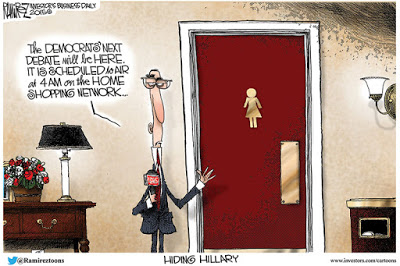 Facebook
Twitter
Pinterest
WhatsApp
The coronation of Hillary Clinton is of prime concern to the Democratic Party’s handlers and mandarins. They made the decision to hide her until she can become the Party/Political Labor Union’s nominee. The mainstream media, which serves the Democratic National Committee, is acquiescent in this.

The question is whether or not this will better prepare her for what she will face in the ordeal of running for President as a candidate.  Will the thick glasses that she wore after her organic brain injury in 2012 return along with the lank, unwashed hair that we became familiar with, or will the coifed efforts of the staff continue as she personally deteriorates?

There is monumental pressure which comes with not knowing when or if the FBI will refer her case to the US Attorney, thus derailing all of the plotting and skulduggery. How does that impact her daily life?
Then there is Bill, endless philandering, and her preference for female sexual company. Would an opponent mention that in response to her attacks? Can she survive the repost? The media will shield her to the extent possible, but even they may find that they have some limits – brought on by the hated, unrelenting and highly watched FOX News cable cycle.
I wonder whether or not Donald Trump will excuse her from the lectern in debates, or whether she will have to content herself with dumping into her ‘depends’?