Compendium (looking ahead to 2016)

“All is lost when a man’s first vice is a delusion of infallibility.

“All other vices will then cascade through their lives, and they will be forced by the resultant cacophony to jam their fingers ever more forcefully into their ears.
“Wise people realize the limits of their own knowledge and accept that new arguments must be confronted or compel a change of opinion. Fools have all the answers and brook no new questions.” — Benjamin Franklin, Poor Richard’s Almanac
You don’t have to be the “Great Karnak” to foresee that there will be a lot of political blogging in 2016. 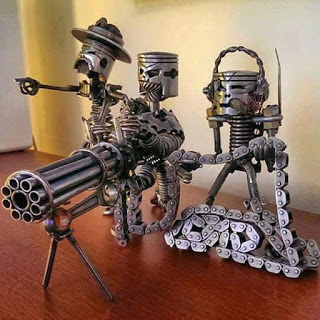 The difference between men and boys is definitely the price of their toys. And just when you think that you have all of the material goods worth acquiring, something else catches your eye. Bloggers, I am not asking for permission or forgiveness.

When you are generally self employed, there is no telling what will come through the door. Looking ahead to 2016, there is the inevitable return to working in Mexico. I feel like Al Pacino’s character in the Godfather. Just when you think you’re out, they pull you back in. I’m sanguine about it all, but it’s a reality and the wheels are in motion to drag me back into the hell that is Mexico.

Don’t get me wrong. I like Mexican people and I love Mexican cuisine, but working in Mexico with all that brings is not pleasant. But it pays the bills.

There is talk of re-starting my failed UAV/Drone start up company. The company didn’t fail because of the potential or because of the technology, but because of two very dysfunctional folks who monkey-wrenched the program unwittingly. I’m cautious about dipping my toe back into that pond.

And then there is Texas (IBM/UNT). No doubt I’ll be back in Texas – which means also Norway and the Faroe Islands. I do like Norway but haven’t cultivated a taste for lutefisk yet. A lot of that comes down to simple budgeting and re-budgeting. Profit/Loss projections, etc. Being self-employed means that time=money. Bureaucrats working for public institutions and even large private concerns don’t always appreciate that equation.

FRIENDSHIP
Auld Lang Syne is a Scottish poem written by Robert Burns in 1788 and later set to the tune of a traditional folk song. The song’s title may be translated into Standard English as “old long since” or more idiomatically, “long long ago”, “days gone by” or “old time’s sake”. The song begins by posing a rhetorical question as to whether it is right that old times be forgotten, and is generally interpreted as a call to remember long-standing friendships.