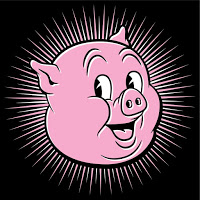 Yes, today marks the beginning of the Year of the Pig in Asia, and you should celebrate by eating bacon for breakfast (or maybe bacon and sausage in a breakfast burrito!). It’s said to ward off Muslims, who are far more prevalent than vampires. I think that I’m going to start off the year right and have carnitas tacos for lunch right on the heels of the breakfast burrito. How about THAT?
People will be burning hell money, setting off fireworks and doing all of the things that they do to to usher in the Pig. I’ve been in Asia during new years celebrations. In some places, it’s a social deal. In others, people cower in their homes since it’s also the Day of the Dead.

You should be able to eat as much and not gain weight during the Year of the Pig – if the universe was just… yeah, right.

Today also marks the end of the struggle that I’ve had with the company that contracted to paint the inside of the hovel.

The painting contractor walked off the job. So I went against his bond. The inspector from the insurance company came out and found in my favor, a month ago. The painter had until today to finish the job or the insurance company would revoke the bond and pay me. I was first in line. I understand that there are a score of people with claims in line behind me. With the $$,$$$ back in hand, I can finally get the painting finished.  The general contractor paid the painter, in full, up front, which is another story all together.
There was one coat of paint sprayed on, not well applied, and there hasn’t been paint on floorboards, door casings, the walls and ceilings weren’t repainted. The paint contractor in question was the largest in the area. (not anymore) The lack of paint has meant that I can’t move all of my stuff from the garage to the house. I could but it would be in the way and I don’t want it to be damaged in the process.
It’s too cold for the paint to stick on the outside of the shack. I must wait for Spring to get that part of this ordeal finished. I think that I have mentioned that I would NEVER build a custom home again. Absolutely never. WAY past time, WAY over budget, and a continual hassle. (are you hearing me, Fredd?) I still have workmen doing this and that inside the house every day to get things right. Yes, there is some light at the end of the tunnel and you’ll say that it is worth the effort then. But this BS has been going on for two years of my life and I don’t have two years to waste.
TV – as of yesterday, the TV went in over the fire place in the great room. It’s not hooked up to anything yet, but there is a TV.