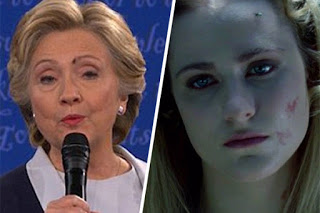 What should we expect? I thought I’d delve.

I can’t help but wonder if we won’t see more flies on Hillary at the third debate. Maybe they’ll crawl across her eyeball in a tribute to the new HBO series, “Westworld” (remake). (here) (more here) It makes perfect sense if she is possessed by a demon, as some exorcists suggest.

I wouldn’t rule a seizure out on the part of Slick Willy. He didn’t seem any too pleased when Trump brought in the women that he’d abused and/or raped.

For the third time, Donald Trump will be debating against the news media. Chris Wallace is likely to be more fair than his predecessors, but time will tell. Wallace has been more fair than the shills at CNN or NBC in the past, but he’s part of the media community. The news media is desperate to destroy Trump. The Donald must overcome them (and the rampant fraud expected at polling places) to win the votes needed to triumph.

Voter fraud is what they can get away with now (see above). A President Clinton vows to open the borders and invite everyone who wants to cross — with the intent to break the political system forever (Wikileaks). Experts feel that the population of the US could double in four years with refugees flooding in from all corners of the world – arriving to full health care and welfare benefits. We’d be lucky to get away with a $30 trillion deficit by 2020.
Ok, back to handicapping the debate.

The media foamed at the mouth and recoiled in great horror when Trump suggested that if he won, he’d appoint a special prosecutor to get to the bottom of Hillary’s evil and criminal behavior. However you KNOW that Barack is in it as well, so the Dems are not just fighting for their political futures, they are also fighting to keep from being held to account.

Would Barack be given exile rights in Kenya? From the news reports, he’s not all that popular back home, largely due to his advocacy for homosexuality. He’d have to find some country that would shelter him from the consequences of his actions. Maybe Barack and Hillary would end up in Russia living on the same floor of the same building as Snowden is? Would Putin grant sanctuary or would he allow them to be hauled back to the dock (in chains) and held to answer before a jury of their peers? While Barack is in exile in Russia, would he be compelled to take his mother-in-law (who now lives in the White House) with him?

We know that the People’s Republic of China is unlikely to give Barack and Hillary sanctuary. The same is true of Israel…however the North Koreans could put them to work in the pea fields. It would be the first honest work that either of them ever did.

Will Director Comey, the corrupt leader of the FBI, be paraded into the debate this time and placed front and center to look into Hillary’s reptilian eyes? I realize that he’s not a rape victim (or maybe he is and we don’t know), but Hillary doesn’t trust law enforcement and she might think that he cut a deal with Trump? It would be great theater. It could only be better if Hillary went into a grand mal seizure…but I don’t think that America is that lucky.

UPDATE: Maybe Sec. Clinton will be asked about the secret arms deal that she participated in in Libya? That would be worth the price of a bag of Cheetos.