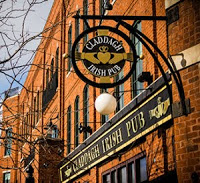 Pat and Mike were walking down a street in Dublin. As they passed by a pub, Mike opened the door and shouted, “Paddy Murphy’s a baby raper!”

Then they continued walking. Pat turned to Mike and said, “You know, Paddy Murphy isn’t a baby raper.”

Mike replied, “Sure you and I both know it but that lot at the pub doesn’t. It only took me a second to say it and Paddy will spend the rest of his life trying to deny it.”

So it is with the news media and Donald Trump.
Expect a new story of sexual depravity every couple of days. When it’s proven false or the public doesn’t care, another one will be blasted over the air waves. That’s how it’s done, and that’s what the mainstream media will stoop to on order to keep Trump from being elected. Nothing else worked, but the Hillary Clintons and John Podestas of this world feel that the pervert story will gain traction.
Hillary Clinton can win by doing nothing because the game is rigged in enough states to virtually guarantee her a victory. There will be no Clinton interviews or press conferences. No more seizures in public – just deafening silence – as the corrupt media does her work for her.
The mainstream republicans like McCain and Ryan will snicker over drinks because they benefit from Democrats being in charge in just the same way as they benefit from Republicans being in charge. Trump is neither, he never payed his dues and he refuses to play the Capitol game, which is completely corrupt.
Trust me when I tell you that perilous times are coming. Take precautions, be aware, and prepare now that you may be prepared then.