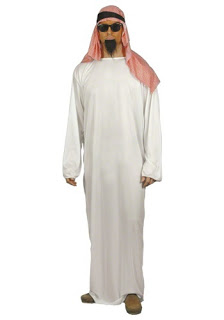 In the spirit of the season, I have a few humble ideas for your Halloween enjoyment, and for those around you who are celebrating the season

If your tablecloth is worn, you can go as an Arab.

If you have an old, torn sheet, you can go as an Arab (or a ghost). Same outfit except you keep the front of the sheet open if you’re an Arab.
Any of these outfits plus a few road flares and duct tape makes you a mad bomber. Stay in character and chant “Death to America” as you’re jonesing for free candy. 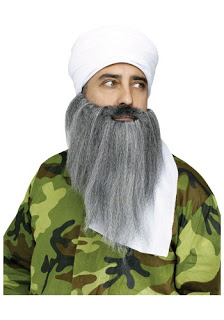 I’ve been told that trimmed (and glued) pubic hair makes a great Arab beard. I have no experience with this, you have to try it out for yourself.
For those of you who have a few bucks burning a hole in your pocket, you can buy a fake beard (left) at a novelty shop, wrap a towel around your head and wear an old BDU and you can go trick-or-treating as Osama bin Laden.
I’ve been told that blending any of the above with a Barack Obama mask is in bad taste, which says to me: “Try it!” 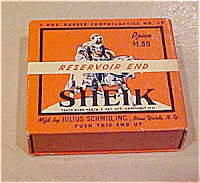 If you’re going as a sheik, it might be a good idea to stock on condoms to hand out at the party. Isn’t that what sheiks do?
The Burka costume is going to be a big hit this year. If you can’t afford the $35.00 price tag, dye a sheet black and cut a slit instead of eye-holes (the difference between a black ghost and traditional Muslim female clothing). 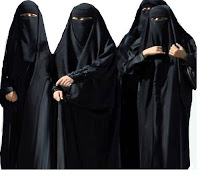 If you’re wearing a Burka, you need to make sure that you walk three steps behind the sheik-sheik and give all of your candy to him. He will decide how much of it to give back to you. If you and all of your friends go trick or treating in hijab, get together and take a group photo – for the memories. 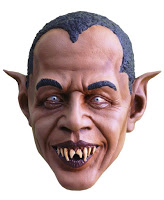 There is also the Baracula mask for those of you who want to represent the POTUS as a vampire. It’s not politically correct because we wouldn’t want to mock the ‘leader of the free world’, would we?
If you are going as a couple, may I suggest a Star Wars Wookie outfit for the lady?
If you’re going as Hillary (pants suit, portly belly) and Huma, make sure to wear comfortable shoes to complete the ensemble. Bring a broom and be prepared to ride side-saddle if you’re Huma. Hillary will straddle that bad boy. 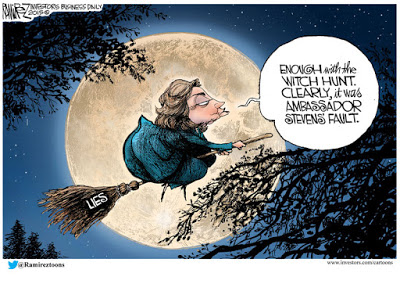