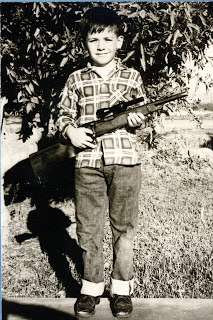 Facebook
Twitter
Pinterest
WhatsApp
You can run, but you’ll just die tired.
This photo was taken at about the time that I killed my first deer – medium sized buck, shot on the Mogollon Rim in Eastern Arizona.
As a young man I was prohibited from owning a BB gun. My grandfather (who raised me) said that it would teach me to shoot indiscriminately and that wasn’t part of the code that he – and I, by default, ascribed to. He wasn’t fond of handguns because he felt that a precise shot at range was an art form that could only be accomplished with a rifle. He also taught me not to shoot anything that I wasn’t prepared to properly clean, cook and eat.
I was raised with the doctrine that shooting was an act of deliberation and that putting ordnance on target needed to be considered circumspectly. It’s never a small thing, is it? The animal or bird that you kill in jest dies in earnest.
Now I have a grandson who is 7 and should be shooting, but his mother/my daughter balks at the thought. She has been raised in California and even though she has a police officer husband there is a different dynamic at work.
When she was in the police academy, she beat all of the men at pull-ups, having been a gymnast, she is an aggressive daughter…but my efforts to raise her in a proper gun culture fell short. Maybe it’s the age we live in? Maybe it’s simply the place she was raised and the people she grew up around.
I’m not suggesting that it’s wrong of her not to want her oldest son following the family tradition of shooting from the time you’re old enough to shoulder and sight the weapon. However, when you deny young men the discipline and focus necessary, are you doing them favors?
Something happened to me, growing up and shooting, putting ordnance on target – when I gravitated to hunting human game in the military and in my professional life, spent doing that legally. Much of my interest shifted to black powder hunting – one shot, primitive weapon.  It changes how you hunt, and the mindset of your hunt. A flintlock musket or rifle is not much good in the rain… I have an 85 lbs pull Kodiak recurve bow, but prefer the 42 lbs. bow — compound bows are much better, but there is an earthiness to hunting with something not quite so precise, not quite so much of a sure thing.