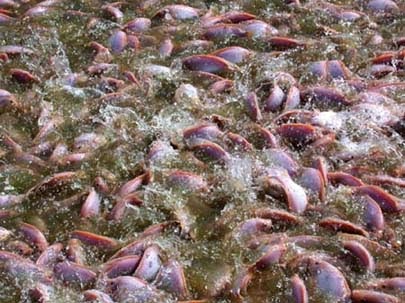 Facebook
Twitter
Pinterest
WhatsApp
I like to eat most fish. However, I draw the line at tilapia. Yes, I know that it’s popular. It’s a type of fresh water perch (like the popular Blue Gill game fish) that grows quickly and is very hardy. Usually they are farmed in the tropics since they thrive in warmer climates.
According to the National Fisheries Institute, the mild fish has climbed to become the fourth most eaten seafood in the U.S., behind only shrimp, salmon and canned tuna. They’re easy to farm and they are inexpensive to buy.

I recently went out to dinner and everyone at the table ordered tilapia except me. They challenged me and I kept silent, suggesting that my ribeye (cooked to perfection over burning mesquite) was simply a choice in the face of the “healthier option”. I usually avoid dinner table gross-outs. So it’s going up here on the blog instead. Crunch those tilapia down with gusto after you’ve read my experiences — I dare you.

Mexican Farmed Tilapia
While working in Mexico I found that some Beltran Leyva Cartel types were feeding people they killed to farmed tilapia in the Puerto Vallerta area to hide the bodies. Other disturbing reports indicated that the Arellano-Felix Cartel people were doing it in Northern Mexico as well to get rid of their rivals. Apparently tilapia enjoy the meal and grow even more rapidly with the steady supply of protein.
Most of these fish find their way to tables in Mexico and to tourist destinations along the Mexican Riviera, so buying and eating them in the US is likely cartel-influence free. Personally I’ve been put off on eating them.

Santiago “El Pozolero” (The soup maker) Meza Lopez became famous for the “El pozole” (Mexican meat soup), that he made of dead people, killed by the Arellano-Felix Family and later for the Sinaloa Cartel.
“El Pozolero” became famous because he was in charge of getting rid of the bodies of the war that was being fought in Tijuana over the drug routes towards the United States. Some of those bodies ended up being dissolved in caustic chemicals. Others made their way to the tilapia ponds because caustic chemicals cost money and the cartel owned tilapia ponds and could solve two problems at once.
I’m not suggesting that all Mexican tilapia are farmed using bodies of dead people as food. I’m not suggesting that even a small percentage of the tilapia raised in Mexico are farmed in that way. I’m simply saying that I refuse to eat ANY tilapia and that’s why.
Chinese Farmed Talapia
A 2009 study conducted by the Economic Research Service of the U.S. Department of Agriculture cited some alarming facts about Chinese farm-raised seafood that did not specifically cite Talapia. Researchers noted that “many of China’s farms and food processors are situated in heavily industrialized regions where water, air and soil are contaminated by industrial effluents and vehicle exhaust.” The report also stated that it “is common practice to let livestock and poultry roam freely in fields and to spread livestock and poultry waste on fields or use it as fish feed.” After the study was released, news organizations, including Bloomberg and MSN.com, reported the rampant use of animal feces as food in Chinese aquaculture – specifically calling out the practice on tilapia farms.

But if it is, the next question is: How much farm-raised tilapia are we eating from China? The answer is: A lot.

A Good Choice? – You Decide
According to Monterey Bay Aquarium Seafood Watch, over 95 percent of tilapia consumed in the U.S. in 2013 came from overseas, and 73 percent of those imports came from China. One reason is that the fish thrives in a subtropical climate, making it a difficult fish to farm in most of the U.S. 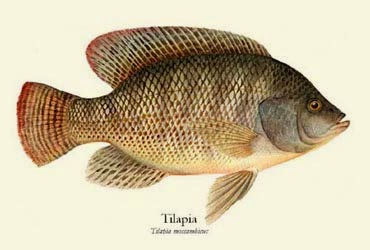 In 2006, Seafood Watch listed farmed Chinese tilapia as “Avoid.” Senior science manager Wendy Norden and science analyst Brian Albaum at Seafood Watch told FoxNews.com that the recommendation was due to poor food quality enforcement and high levels of chemicals, antibacterial drugs (nitrofurans) and malachite green (used to dye silk, leather and paper) in fish samples.
They said that the “Avoid” rating at that time was not due to what the fish were fed, although they did note that “in aquaculture, usually wastes from one animal are unfit to be fed to other animals.”
Today, Seafood Watch gives farmed tilapia from China a “Good Alternative” rating, due to improved enforcement of food legislation. But it cautions that the fish currently tests in the “red zone” for the presence of banned or illegal chemicals such as antibiotics, malachite green and methyl testosterone hormones used in Chinese tilapia production.
Caveat Emptor – Let the buyer beware.