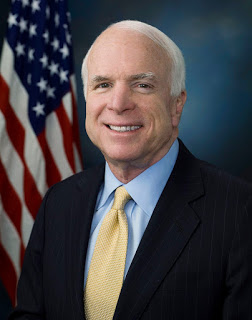 Facebook
Twitter
Pinterest
WhatsApp
Senator John McCain (R-AZ) will die soon and though he’s been through a LOT in his life – done a lot, endured a lot, he will not be able to beat the clock any more than any of you who are reading this will. He has been battling an aggressive form of brain cancer for more than a year, and on his way out, wants to make it sure that President Trump does not attend his funeral.

I don’t think that while I’m grasping for those last few breath’s that I’d care who did or did not show up, but that’s not how Senator McCain rolls. ADDITIONALLY, there’s a lot of ego involved in this situation…where will his mortal clay be buried at Arlington National Cemetery – location-location-location.

When he ran for President, his policies were closer to Democrat than Republican, but he lost to Barack Obama, whose claim to fame then as now was being half-negro. It worked for Obama, and McCain’s pivot left didn’t do him any good in hindsight.
After that, he became a spoiler of sorts and I can’t help but wonder if that was due to his brain cancer, and his fight to keep his wits.

Don Quixote by Miguel de Cervantes Saavedra. “Finally, from so little sleeping and so much reading, his brain dried up and he went completely out of his mind.”

In a fit of bitter anger, Senator Mc’Cain cast a crucial vote against the repeal of ObamaCare in July, singlehandedly scuttling one of the Trump administration’s major policy goals, a move that provoked the ire of Trump but earned him a thank you call from Obama. That’s quite a thing to go out on, isn’t it? An effort to keep the Obamanation alive just to spit in Donald Trump’s eye.
It must be galling for a man like John McCain – to have America vote for Trump and not for him.

“The truth may be stretched thin, but it never breaks, and it always surfaces above lies, as oil floats on water.”

I’m saying good-bye to Senator/Commander McCain now that he’s alive. I hope that his ego in death will allow him to accept that he’s just the same as all of the little people when he gets to the other side of the River Styx.

He had a great career until hubris and bitterness turned him from a man whose love of country defined him, into a small cur-like partisan devotion caused him to forget who paid his salary and kept him in the lap of luxury for 81 years (he was born a Navy brat), lapping at the government trough.