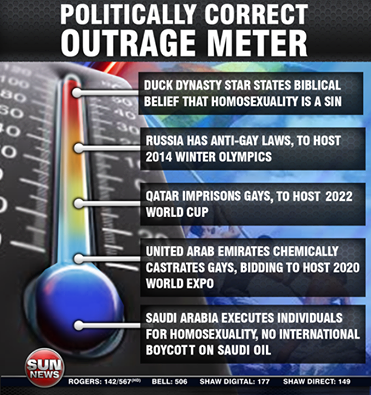 Facebook
Twitter
Pinterest
WhatsApp
GLAAD (formerly known as the Gay & Lesbian Alliance Against Defamation) is an American based organization that monitors the media to promote the image of homosexuals. They have a twisted sense of priorities as set forth below.

It was GLAAD that went on the attack against reality TV star Phil Robertson who suggested that sodomy was a sin (which it is according to the Bible). They are strangely silent when it comes to Muslims castrating homosexual men or executing homosexuals. I wonder why that is? Maybe they fear being labeled “Islamophobic”?