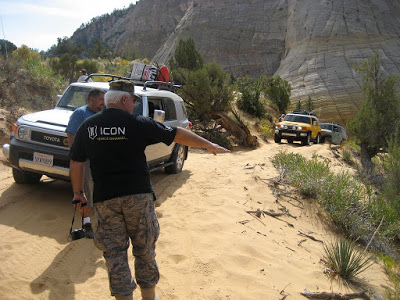 Facebook
Twitter
Pinterest
WhatsApp
House Rules (the sermonette)
1. The middle of nowhere is the best place on Earth.
2. The Phone Call: “I feel so miserable without you; it’s almost like having you here.”
3. You’re more or less on your own. Better to have and not need than need and not have. Knowledge is knowing a tomato is a fruit. Wisdom is not putting it in a fruit salad. If you have no common sense, stay home and don’t bother everyone else.
4. You do not need a parachute to skydive. You only need a parachute to skydive twice.
5. Going to church doesn’t make you a Christian any more than standing in a garage makes you a car. Don’t pretend when your in the mountains. The hills don’t care and if you’re an AH, everyone will know it before you can tell people that you aren’t.


This is part one of a retrospective of a few runs that I’ve made over the past ten years in my Toyota FJ Cruiser. I realize that this blog’s readers may have other 4×4’s that they prefer. While the FJC is not all things to all people, it is a comfortable ride for a short wheel base 4×4 and is very capable off road/off trail. During those 10 years, I’ve racked up 77K miles. There has been trail damage. In all cases, I simply replaced the part with a new part rather than trying to bailing wire the damage. In fact, if I even see that a part is worn, I replace it before mean time to failure happens at an inopportune time. Essentially it’s a new 10 year old vehicle with considerable modifications to make it more capable in the back of beyond. The mission statement for these mods are to bring me home. That’s the simple goal.

For those of you who live in the East, there are “off road parks”, but you lack the vastness of government owned lands that you can access for recreation.
It is those hundreds of millions of square acres that provide grist for personal exploration and expeditions. My children have experienced this land and I hope to share it with my grandkids. It builds respect for the land, for history and for self sufficiency.
Barak and his ilk wanted to seal these lands up and deny them to people who wanted to enjoy them. Fortunately, the damage is being undone these days.
Firearms are an important part of the equation. They are part of American heritage, and are part of the Constitution – The Second Amendment, the next after the first which guarantees freedom of speech, religion, assembly, the press, etc. Some Americans don’t understand this. That is not MY problem.
My family shoots recreationally and they carry for the purpose of self-protection and occasionally while hunting. But the Second Amendment is America’s hedge against tyranny. That’s why it’s written in. And that’s why people want the nation disarmed.
A recent blog post here discussed the history of Zzzyx. The photograph below is of the FJ Cruiser crossing Soda Lake while driving along the Mojave Road (near Zzzyx).
Death Valley is home to many mines. I went back in the salt mine (below) about half a mile, knowing that there was space for a turn-around. It’s an old mine. The shoring will give way in due time, but the rig made it in and out, which is all that matters. 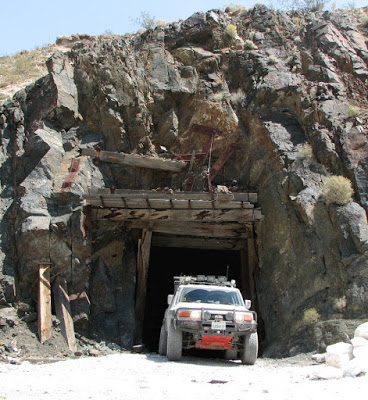 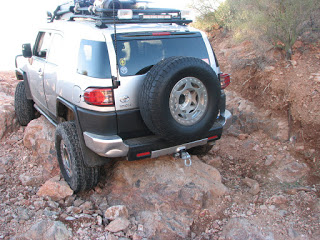 The biggest threat to anyone driving a 4×4 in the back of beyond – well past the horizon – is hubris. Yes, I know that you’re sure that you can make it and you can until you can’t.

Having plate steel from bow to stern is always a good idea (left). And when you slip off the rock and are high centered from bow to stern you’re happy you have them.  But the only thing left to do is maneuver the Hi-Lift jack and stack rocks until you can get off. Sometimes it takes an hour, sometimes a day, sometimes you make camp and get to it over a series of days.

Or you sling the rifle, take water (that you’ve brought in canteens so it can be carried), stuff your pockets with ammunition and food – and walk…unless you were smart enough to pack a satellite telephone.