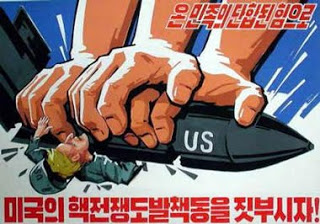 Kim Chol – a pseudonym — released a commentary on 3 May that urged Chinese newspapers and officials to refrain from making reckless remarks undermining DPRK-China relations. The article has a lengthy prologue, but the key points are:

Kim Chol commentaries are comparable in authority to editorials published in China’s Global Times. They carry weight, but retain a fig leaf of deniability as official policy.
The commentary is unvarnished and crude in many parts. It has the style of Kim Jong Un himself, as reflected in his published speeches. It is blunt and arrogant, traits that the Chinese associate with inferior cultures.
It shows that the North Korean leadership pays attention to some of the same Chinese news publications on which this blog relies for authoritative statements of Chinese positions.
Kim Chol’s commentary rejects every item of advice the Chinese have published in the two publications, topic by topic, in the past two months. For example, it ignores the Chinese advice that the North has overestimated the strength of its deterrent because it is puny compared to the devastation the US can impose.
Most egregious is that a some-time Chinese tributery dared to threaten China, the Central Kingdom. At one time, such language could have resulted in a Chinese punitive expedition against the haughty tributery.
This commentary embodies a challenge to China’s role as a regional power. At some point, China must take action to show the North Korean leadership its proper place or abandon the pretense that China is the hegemon of East Asia.
The Chinese have more than two thousand years of experience in knowing how to handle upstart regimes. They will handle Kim Jong Un and do not need outside assistance, except patience.
Russia in Syria
Russian special presidential representative for Syria Alexander Lavrentyev said on 3 May that a draft Russian memorandum on “zones of de-escalation” stipulates that the Syrian armed opposition groups join the ceasefire guarantor countries (Russia, Turkey and Iran) in fighting the terrorists in these zones.

Lavrentyev told reporters: “We decided to take up a path of creating such zones, in which moderate opposition units backed by the guarantor countries would be directly combating terrorist organization groups.”

“The memorandum currently is being elaborated; this is why I cannot tell you about every detail of this document. The wording of the memorandum, which is expected to be signed at tomorrow’s plenary meeting, is being finalized. Work will be continued both with Turkish and Iranian delegations,”

The Russians identified four areas for creating the zones. They were selected based on the intensity of the fighting among Syrian government forces, the AOGs and the Islamic State and the al-Qaida franchise, the Jabhat al Nusra (the al Nusra Front). Idlib, North of Homs, Eastern Ghouta (east of Damascus), and South Syria were specifically identified.
As part of the de-escalation proposal, military units from unspecified “observer countries” could also be deployed.
Turkey, Iran and Russia would create a “joint working group” within five days of the proposed agreement being signed by the warring parties.
The AOGs view the Russian proposals for the possible creation of zones of de-escalation as a “temporary measure and not a substitute for the political process.”
The inability of the US to separate armed rebels from armed terrorists during the ceasefire has been a longstanding point of contention with the Russians, about which Russian Foreign Minister Lavrov has complained repeatedly.
The Russian proposal is clever because if focuses the main effort on defeating the Islamic extremists, which is a condition for any successful political negotiations. It solves the separation problem essentially by co-opting the AOGs into fighting a common enemy. The Islamic terrorists have found AOGs to be easy prey and have attacked them regularly during the six years of the civil war.
Under the Russian proposal, if a rebel group fights the Islamic State, it is a member of the ceasefire coalition and could expect support from at least one of the guarantor countries.
Following recent Turkish military operations against the Syrian Kurdish People’s Protection Units (YPG), Russia has deployed more soldiers to Afrin district (see map above). News services reported that Russia now maintains a significant troop presence in four villages and areas of the district, in addition to manning the ceasefire monitoring center in Afrin.
The Russians are protecting Syrian Kurdish fighters in much the same way the US is. Prior to the latest augmentation, the Russians were thought to have deployed at least 100 soldiers to Afrin.