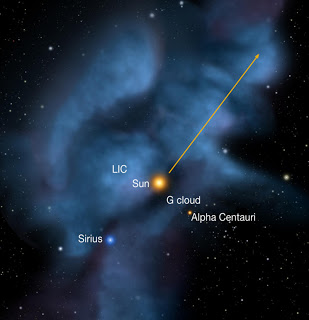 Facebook
Twitter
Pinterest
WhatsApp
The space between Earth and the Sun is full of particles and at times there is more or less interstellar dust (that scientists refer to as interstellar clouds). Interstellar dust isn’t made up primarily of water vapor the way terrestrial clouds are, but the impact is the same. Less sunlight hits the planet when the solar system is traveling through a cloud.
Scientists, including University of New Hampshire astrophysicists involved in NASA’s Interstellar Boundary Explorer (IBEX) mission, have discovered that the particles streaming into the solar system from interstellar space have likely changed direction over the last 40 years.
Scientists are now gaining deeper insight into the dynamic nature of the interstellar winds, which has major implications on the size, structure, and nature of our sun’s heliosphere — the gigantic bubble that surrounds our solar system and helps shield us from dangerous incoming galactic radiation.

The results, based on data spanning four decades from 11 different spacecraft, including IBEX, were published in the journal Science September 5, 2013.

“It was very surprising to find that changes in the interstellar flow show up on such short time scales because interstellar clouds are astronomically large,” says Eberhard Möbius, UNH principal scientist for the IBEX mission and co-author on the Sciencepaper. Adds Möbius, “However, this finding may teach us about the dynamics at the edges of these clouds — while clouds in the sky may drift along slowly, the edges often are quite fuzzy and dynamic. What we see could be the expression of such behavior.”

“Prior to this study, we were struggling to understand why our current measurements from IBEX differed from those of the past,” says co-author Nathan Schwadron, lead scientist for the IBEX Science Operations Center at UNH. “We are finally able to resolve why these fundamental measurements have been changing with time: we are moving through a changing interstellar medium.”

I understand that Al Gore and the progressive Green Movement feel that they can have sole control over climate change, but it’s a fraud.
There are a number of things that impact Earth’s climate, not the least of which involves the region of space that we’re traveling through. There are credible theories that man-made greenhouse gas is helping to avert an ice age. 15,000 years ago, the northern hemisphere was under 3,000 feet of ice.