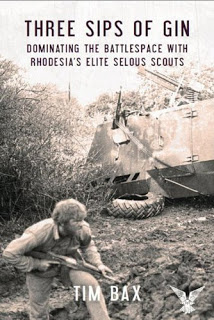 Because I saw this book advertised on several of your blogs, I decided to buy Three Sips of Gin by Major Tim Bax, Rhodesian Selous Scouts. I read the book and I enjoyed it. So I’m passing it on by making my own recommendation. It can be yours on Kindle for just over $4 – and I think that it’s entertainment worth the price.
I personally identified with some of what Tim Bax went through, though I’m not African, and never lived there. You don’t have to chew the SAME dirt to appreciate what another lived through.
I’m lucky to have lived in largely the same era as Tim Bax. He’s a bit older than I am, but coming of age in a military environment prior to and during the Age of Reagan and Bush-the-Elder was a far simpler, far more interesting, and far more challenging age. It was a time of adventure, so often lacking in the controlled times we live in now.

The story revolves around Bax’s own journey and the colorful and often eccentric people he met along the way.

Living a life well, in my opinion, requires that one take risks and leap from the aircraft into the dark (hopefully with a functioning parachute). If you’re not a risk taker and don’t take a measure of thrill from pushing the envelope, you’ll never  understand why I recommended the book.

I know people who peaked in high school, and while that may be enough for them, I didn’t really like high school and only came into my own later – facing tough training and a far tougher real world. It is from that perspective that I appreciated Three Sips of Gin.