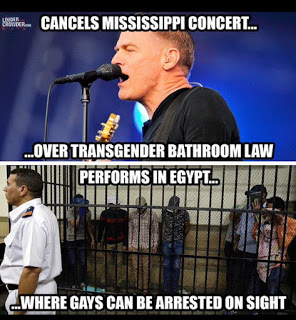 At first the liberal outrage over conservative areas not allowing men (most of whom are freaks and perverts by their own admission) to use women’s restrooms seemed silly to me. What person in their right mind would encourage men to use women’s restrooms?
Since “transgender” is officially a state of mind more than a surgical decision (see Woman-of-the-Year Bruce Jenner), I’m sure that we will see the high school boy’s football team showering with the cheerleaders.  To be fair, as a high school boy, I would have showered with the cheerleaders too, but that’s really not the point, is it?
Even after the surgical tuck-and-roll, a man still has XY chromosomes even if his courting tackle has been removed. Maybe it needs to come down to some sort of automated blood test to determine who can enter which restroom. XY gets one restroom, XX gets the other? Or does this simply reflect my traditional bias that there is a biological difference between men and women?
Though do consider “trannys” to be freaks. I realize that they are freakishly damaged humans and believe that they should be treated fairly under the law. However, making everyone else in society miserable or putting women at risk is not the solution to their individual problems.  And if some guy wearing a dress thinks that he can get away with “meat gazing” me while I’m standing at a urinal watering the horse, I will suggest to you that the results to the tranny will be less than satisfying.