Framing the Situation in Ukraine 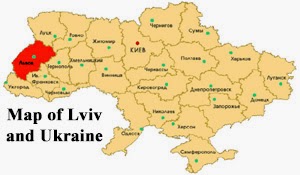 Facebook
Twitter
Pinterest
WhatsApp
The American Press has seized on the situation in the Ukraine to showcase unrest. Depending on who you listen to, the present situation seems to be characterized as emblematic of a weak American presidency or simply something to take up time on the evening news without a suitable domestic crisis to crow about.
As with almost any country in the world (including the US), there are regional differences that manifest themselves geographically and culturally.  Travel from Los Angeles to the “deep south” to Salt Lake City to Detroit and you’ll catch the flavor difference. Ukraine has the same cultural rifts that have developed over time. For them there is also a difference in language. Some speak Ukrainian an others speak Russian.

Lviv is the largest and most important city in the Ukraine, and today the opposition group, People’s Rada, is very active there as they want to declare western Ukraine independent from the rest of the nation. Lviv has been part of Austria, part of the Polish Commonwealth, and is the birthplace of the Ukrainian language. However, Lviv does not represent the Ukraine anymore than New York, Washington DC or Los Angeles are emblematic of “Fly-Over Country.”
Since about 1990, Ukraine has been targeted by NATO and Western Europe as a target for expansion into the Russian sphere of influence, of which Ukraine is clearly a part. Most of the Warsaw Pact countries and all three Baltic countries joined NATO as part of this eastward expansion program whose strategic purpose always was to contain Russia.

The Russians drew the line on NATO expansion at Georgia and Ukraine. In Georgia in 2008, Russian military forces fractured Georgia by enabling the secession of Abkhazia and South Ossetia.

In Ukraine, after the tenure of former President Viktor Yushchenko and the election campaign of Yulia Tymoshenko, a plurality of Ukrainians voted in favor of Russia. The Ukrainian presidential elections in 2010 that brought the Russian favorite Yanukovych back to power were judged fair by international observers. The outcome was not the outcome the US and Western Europe expected.
Despite the election outcome, which some still dispute, the Western Europeans, with US backing, have again been trying to wrest Ukraine from the Russian aegis by encouraging the protestors. The US and other Western European leaders — French President Hollande for example — have blamed the Ukraine government for the violence, including the fires in Kiev that the protestors admitted they started.
The protestors’ prospects for forcing the government to resign appear slim, despite sensational western TV imagery. The country is divided over policy, but it is not unstable. The question that never seems to get asked or answered is who has been financing abnd providing sustainment for the anti-government demonstrators during the past two months.
The Russians consider Ukraine as part of that sphere of influence. Some entities in the West have chosen to challenge the Russian sphere, but with no ability, promise or authority to provide practical support to the activists and no will to confront Russia.
It’s a place for the West to challenge Russia, crafted in a type of ‘proxy effort’ of activity where the protests are encouraged. The problem is that most Ukrainians would seem to want to remain in the Russian sphere despite the vocal protests that are racking Lviv and even Kiev.