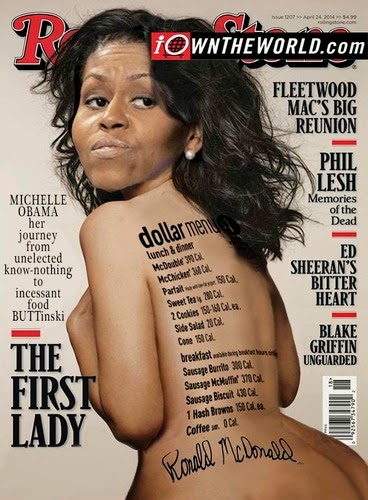 Facebook
Twitter
Pinterest
WhatsApp
CRUEL  GODS  OF  FATE
There aren’t many women who I find as personally repulsive as I do the First Lady of the United States. Rev. Jeremiah Wright introduced Michelle and Barack on April Fool’s Day all those years ago, and rumor control holds that he tried her out before she became Barack’s. In which case Reverend Wright’s taste also comes into question instead of it being an incredibly cruel April Fool’s prank on Barack.

Attorney General Eric Holder recently complained because Congress has been holding him accountable for lying under oath – on several different matters.

Back when there was a mainstream media that held politicians responsible for conspiracy, obstruction of justice and perjury, we put Attorneys General in jail. These days it’s simply chalked up to racisim because Eric Holder (like Barack Obama) is a a man of mixed race who has selected “negro” as the portion of his bloodline which will do him the most good.

I realize that it’s difficult for politicians to focus on more than one thing at at time, however, Iran is still building nuclear weapons without restraint and we’ve ‘pivoted’ from Iran and Syria to being concerned about Russia and Ukraine.

The Obama Administration would rather that you focus on the crisis of the moment (real or faked) and forget about those old crisis points like ObamaCare, Fast and Furious, IRS Scandal, Benghazi, and the host of abuses that the nation has heaped on the shoulders of its citizens. We’ve moved on from Iran in our hashed up foreign policy that started with the inept SECSTATE Hillary R. Clinton and has been just as fouled up by her successor SECSTATE John Kerry. But does that mean that the world is now safe from the tender mercies of the Shiite Mullahs?