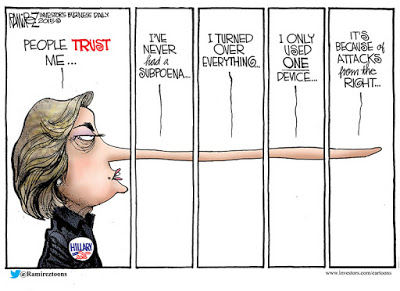 It does not matter how big the lies are or how often she tells them. Whether Hillary Clinton blames an “awful video” that none of the rag heads saw on the Benghazi Massacre or whether she’s deleting e-mail to cover herself, the left will drink the Kool Aid and will love her for it. Self-identified ‘progressives’ love her in much the same way as a mother loves a deformed infant or an addict loves his drug and they are not going to give it up.
She was a bungling fool as SECSTATE, not unlike her successor, John Kerry has been, but when you own the media, it’s all covered up. The prime (gut) difference between Hillary Clinton and a rattlesnake is that you can become attached to the snake in time because it has redeeming characteristics.