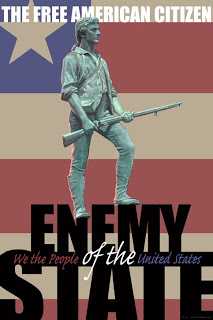 BUT WAIT A MINUTE – Have you read the report? (LINK)

Yes, it’s true that the report was damning against Assistant Attorney General Lanny Brewer, who resigned previously and  Jason Weinstein resigned today, but did the Attorney General investigation team interview anyone above Brewer’s and Weinstein’s rank? THAT WOULD BE A NO. Oddly, both Erick Holder and Barack Obama are also above Weinstein’s rank. They weren’t interviewed either. Attorney General Holder has been held in contempt of Congress on this matter and President Obama denies all knowledge, and because of that, they weren’t interviewed either with the documents that Congressman Darrell Issa (R-CA) confronted Holder with. The report was damning against the little fish but the big fish swim away. Sound familiar?

Case in point, Chapter One of the report identifies key individuals who declined to be interviewed, significantly including “Criminal Chief [Patrick J.] Cunningham [who] declined through counsel our request for a follow-up interview…We also requested an interview with Kevin O’Reilly, a member of the White House’s National Security Staff, [who] declined our request through his personal counsel.”

Is George Soros Involved in the Cover Up?

Soros, a former self-confessed Nazi collaborator during World War Two is one of those comic book style evil characters (no white cat and no monocle, but everything else) that has had a lot to do with the political ascendency of Barack Obama. His media giant, Media Matters turned out to be the consulting firm that acted as an intermediary for the US Department of Justice.

The Department of Justice and Media Matters corresponded and coordinated on stories about Operation Fast and Furious “gunwalking,” going so far as to disparage the citizen journalist who initially broke the story, Matthew Boyle of The Daily Caller reported today, citing emails obtained from a Freedom of Information Act request to determine the extent of cooperation between the government and the “progressive” advocacy group.

Back to the News:

“The report marked Jason Weinstein, the deputy assistant attorney general for the Criminal Division, as the highest-ranking DOJ employee in a position to stop the program. Weinstein, who disputes the findings, is resigning in the wake of the report.
Another official criticized for not asking enough questions about the Furious operation, former ATF acting director Kenneth Melson, retired after the report came down.
The nearly 500-page report was completed after investigators reviewed 100,000 documents and interviewed 130 people. (Fox News)

‘Furious’ report slams ‘disregard’ for public safety as DOJ officials quit
DOJ and Media Matters coordinated Fast and Furious reports
Keep in mind why Fast and Furious is important. It was the Obama Administration’s move to establish a case that American firearms were being sold across the border to drug cartels in Mexico in LARGE NUMBERS to justify a denial of YOUR Second Amendment rights.
Do firearms make their way into the hands of Mexican cartels?
Yes.
How many by percentage?
6-8% of the total.
That wasn’t a big enough number for the Obama Administration. There was going to be a heavy push back on their efforts to deprive Americans of their firearms. Thus the Fast and Furious scam was born. And the flag of the ObamaNation (below) was conceived.