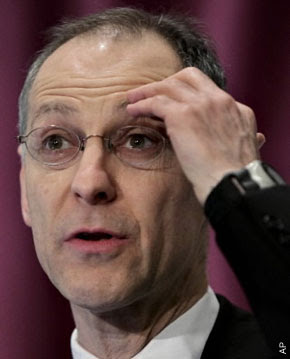 In this blog post I will be quoting the NEW YORK TIMES (click here to read the entire article)
and the NEW YORK POST (click here to read the entire article) I wouldn’t want to take anything out of context out of fear of being reported to President Obama at flag@whitehouse.gov, the contemporary version of being “denounced” to the organs of the state in Soviet Russia.
But before I explain who Dr. Ezekiel Emanuel is, I want you to read about Representative Nancy Pelosi (D-CA) and about her constituents who she wants to convert to ObamaCare. I went to the official source – http://www.house.gov/pelosi/ to get it from the horse’s mouth (as it were).

On July 6, 2009, Congresswoman Pelosi toured the Mission Neighborhood Health Center (MNHC) in San Francisco with John Gressman, President and CEO of the San Francisco Community Clinic Consortium, and Brenda Storey, Executive Director of the MNHC. Through the Recovery Act, MNHC received more than $1 million in additional funding, allowing them to extend their hours to serve more clients and continue their vital chronic disease management program. Click here to read Congresswoman Pelosi’s remarks. (FROM THE PELOSI WEBSITE – CLICK HERE FOR REFERENCE)

Note that Representative Pelosi’s constituents have chronic illness and she professes to care about it. How much does she really care? What does President Obama’s Medical Care Advisor, Dr. Ezekiel Emanuel think about care for those with chronic illness?
We’re back to the New York Times and New York Post articles cited above.

Who is Dr. Ezekiel Emanuel and why should you care?
He is special advisor to the US Budget Director, Peter R. Orszag. He’s also the older brother of Rahm Emanuel, the White House Chief of Staff. He’s a key advisor to President Obama on healthcare reform. As such, he is influencing the DIRECTION in which the President is pushing healthcare reform. You have seen the video where President Obama stresses the single-payer system (only a government system of healthcare in America) is his goal.
He’s the guy President Obama looks to for solutions to healthcare problems. President Obama values his opinions and pays for his advice.
This is what Dr. Emanuel believes (refer to the NY Times Article)
Now we’re moving on to the New York Post (article cited above):
Representative Nancy Pelosi (D-CA) has a district with many disadvantaged elderly, many people who have been struck down by AIDS – and she firmly supports the program the President’s top medical advisor suggests. Nancy, it looks like you’ll need to find some new voters after the people you are “representing” are denied care and die.
I would like Rep. Pelosi or one of her people to respond to the blog (without calling me names). Please don’t send the union thugs to my house to beat me or my kids up.