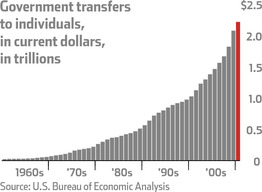 The growth of entitlement payments over the past half-century has been breathtaking. In 1960, U.S. government transfers to individuals totaled about $24 billion in current dollars, according to the Bureau of Economic Analysis. By 2010 that total was almost 100 times as large. Even after adjusting for inflation and population growth, entitlement transfers to individuals have grown 727% over the past half-century, rising at an average rate of about 4% a year.

In 2010 alone, government at all levels oversaw a transfer of over $2.2 trillion in money, goods and services. The burden of these entitlements came to slightly more than $7,200 for every person in America. Scaled against a notional family of four, the average entitlements burden for that year alone approached $29,000. (Wall Street Journal)

How WERE Americans exceptional? 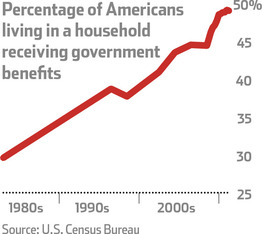 From the founding of our nation until quite recently, the U.S. and its citizens were regarded, at home and abroad, as exceptional in a number of deep and important respects. They exhibited a fierce and principled independence, which informed not only the design of the political experiment that is the U.S. Constitution but also their approach to everyday affairs.
The proud self-reliance that struck Alexis de Tocqueville in his visit to the U.S. in the early 1830s extended to personal finances. The American “individualism” about which he wrote did not exclude social cooperation—the young nation was a hotbed of civic associations and voluntary organizations. But in an environment bursting with opportunity, American men and women viewed themselves as accountable for their own situation through their own achievements—a novel outlook at that time, markedly different from the prevailing attitudes of the Old World.
The corollaries of this American ethos were, on the one hand, an affinity for personal enterprise and industry and, on the other, a horror of dependency and contempt for anything that smacked of a mendicant mentality. Although many Americans in earlier times were poor, even people in fairly desperate circumstances were known to refuse help or handouts as an affront to their dignity and independence. People who subsisted on public resources were known as “paupers,” and provision for them was a local undertaking. Neither beneficiaries nor recipients held the condition of pauperism in high regard.

“Our nation is on an unsustainable fiscal path.” — The bipartisan 2010 Bowles/Simpson Commission

We have become a nation where paupers are held in high regard. The “fairness” mantra has been so overused as has the mantra of “racism” that they’re almost comical – and really would be but for the fact that we these are now the guiding principles of the nation.
It’s come to the point where politicians MUST keep promising to fund the paupers in order to get elected – because they, in a very real way, outnumber those who pay for their entitlements. If we completely eliminated all federal employees from the employment rolls and cut defense spending to zero, there would still not be enough money to pay for entitlements. That is the reality that NEITHER political party can utter for fear of being destroyed by the greedy paupers who want “what is theirs” but what they, for the most part, did not earn.
In my blog yesterday, I explained how underfunded State and Local Pensions amount to debt between $1 trillion to $25 trillion – nobody knows how much for sure. That is because obligations were incurred without any responsibility on the part of the politicians who spent money belonging to those yet unborn.
How much worse will it get? The prospect of careening along an unsustainable economic road is deeply disturbing. But another possibility is even more frightening—namely, that the present course may in fact be sustainable for far longer than most people today might imagine.
The U.S. is a very wealthy society. If it so chooses, it has vast resources to squander. And internationally, the dollar is still the world’s reserve currency; there remains great scope for financial abuse of that privilege.
Such devices might well postpone the day of fiscal judgment: not so the day of reckoning for American character, which may be sacrificed long before the credibility of the U.S. economy. We have become a nation of takers. We are no longer the nation of Jefferson and Lincoln. Witness if you will:
• President Obama would is waist deep in muddy and contradictory descriptions and explanations of the terrorist (he now concedes) attack on the U.S. diplomatic compound in Libya.
• Data just released for August 2012 showed that real disposable income had again declined.
• Obama actually celebrates the fact that for the first month since he took office there were more U.S. jobs than when he took office.
• The most recent figures show a 13.2% decline in durable goods orders.
• Nearly 25% — the highest in three decades — of Americans between 25 and 55 are unemployed.
• The second-quarter growth rate was adjusted down from an anemic 1.7% to the stall speed of 1.3%.
AND the American people want to return Barack Hussein Obama to office – because he promises to print more worthless greenbacks to feed their greed.