Everybody Wants to Rule the World 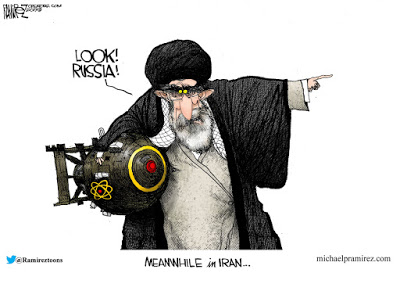 I know, it’s a song. It’s also true.
The Russians have been scrupulous in their control over nuclear weapons, even when the Soviet Union fell.
Iran, like North Korea, promises to use them to wipe out their neighbors and everyone else who pisses them off. While I can appreciate that general sentiment, it’s problematic. The US can turn Iran, the Norks and pretty much everywhere else into a sea of radioactive glass with the push of a button. We don’t have to get close. We can do it with submarine launched ballistic missiles or land based weapons. So can the Russians. Which is why I’m so confused .
The threats to peace and stability come from Iran and North Korea. But the corrupt, wicked, elite, smug, lying, nasty, foolish mainstream media only have one story. Only one. (well, two if you count “IMPEACH TRUMP”) They have only one concern for the US and the rest of the world and that’s Russia. Dear readers, we have a lot more in common with the Russians than we do with Iran or North Korea.
I haven’t been watching TV at all. During the move I didn’t have TV or Internet, which was a good thing. I didn’t miss it. But eventually I relented and when the cable guy was plugging things in. He flipped it to Channel 2 and the first thing I saw was CBS News ranting about the Trump-Russia connection. I thought they would have moved on in the intervening week or so. Yeah, right.
So I turned the TV off.