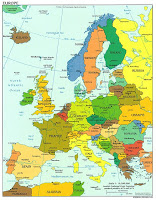 Facebook
Twitter
Pinterest
WhatsApp
I admit that when I think of Europe, I often think of it in a vastly historic context. As a close student of the military campaigns of Charlemagne and of his grandfather Charles Martel, I’ve seen landmarks and at times I’ve mentioned them to my European friends — who don’t care. To many Europeans, their past is not equated with the Renaissance or the Enlightenment, but in terms of tourist dollars.

Most European cathedrals are empty on Sunday and in Germany, some have been sold to Muslims. Europeans marvel at Americans who ‘senselessly cling to their God and guns’ (sound familiar?). European Christendom has gone the way of the dodo bird and the iron horse. In its place it their newly found socialism, which is choking them like a strangler fig.
I’ve been on the phone with friends from Europe because I’m planning to visit this summer. Their tale of recession seems to be more profound than mine is. Prices there are roughly double what we pay in the US and their future seems more uncertain than ours is — because they’ve bought off more completely on the promise of a socialist worker’s paradise. They’ve caved to the Muslim thirst for Sharia Law and are now trying to reverse the curse.
European taxes are draconian and the higher taxes go, the more people cheat on them, the less revenue comes in. Just like in the US – but worse. Friends advise that the vast and pervasive value added tax is more for tourists and the unwary than it is for the wise shopper, who will be able to purchase under-the-table without paying the tax. So I guess it means that I’ll need to take a local with me when buying presents to bring to the people back home?
Gasoline/petrol is heavily taxed in Europe. $10/gallon seems to be the norm. Electricity is about three times as expensive as it is in the US and there is no relief in sight. You can avoid paying value-added-tax by negotiating the ‘real price’, but you still have to buy gasoline at the pump and the electric monopoly is an arm of the government, and taxation.
15% unemployment is the rule in much of Europe (it’s double that in Greece), and nobody can figure out what the underemployment numbers would be. Nobody bothers to attempt to figure that one out. But no worries. You can make more on welfare than you can working in much of the utopian worker’s paradise, so staying home, drinking beer and watching the television has become a ‘job’ to many. Their small, expensive apartments look and feel more like jail cells and when they walk the streets, they’re shoved by hoards of North African, sub-Saharan African and Pakistani immigrants who out-breed them 10 to 1 and will soon be the majority in many quarters.
But, in the United States, the political class seem intend on copying the European model an force-feeding it to Americans. The only question I can mount is simply this: Why would we want it?