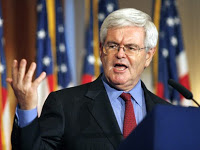 There didn’t seem to be any of the usual gang of bloggers out there who felt energized in the slightest by the Newt Gingrich announcement that he was going to run for President of the United States. I know that he has a knack for raising money and that he’s a bright guy, but I didn’t think that he’d make a good president and I don’t think that he’s a ‘good man’. So I more or less ignored his announced candidacy. Since then he’s turned on his own party, announcing that his ideas for Medicare reform were the only ones that we should take seriously. That flopped. And yesterday every single one of his campaign staff quit as he was setting off on a Mediterranean cruise. He plans to “restart his campaign in Los Angeles on Sunday” and I can’t help but wonder who will show up to watch and listen. I can only say that I won’t be there and there isn’t anyone I know who will be there — and I live in the LA area. 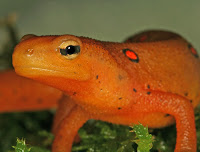 a newt but not a politician
The usual suspects who are running for president on the Republican ticket have been tepid at best. The front-runner, Mitt Romney seems like a nice guy, sorta, but he’s not anyone I’d send money to, or put a sign on my lawn in support of. Herman Cain won’t make it, and neither will Bachmann. Pawlenty might actually make a good president but nobody cares because he doesn’t have the traction or the charisma. Palin isn’t going to run, but she wants to keep her options open. Ron Paul is running again (as usual) – who cares?
That left the field of people who I would support if they ran, but none of them were running – to include Gov. Christie (R-NJ), Rep. Paul Ryan (R-WI) and Gov. Perry (R-TX).

AND the current buzz is that Governor Rick Perry is considering running for president. He has solid credentials at the governor of Texas, both as a fiscal conservative, as one who is concerned with bringing order to the US-Mexico Border, and as one who would bring balance to the out-of-control liberal policies that are causing US States to recoil against the federal government (ObamaCare being the poster child).

(CBS NEWS) With confirmation that Gingrich’s top advisers have quite en masse, this obviously means his campaign is all but done, which frankly was only a matter of time and comes as a surprise to no one. The more interesting question for 2012 is what this means for Texas Gov. Rick Perry.

Sources close to Perry tell me he is now “serious” about a presidential bid. He has been talking with his big money donors for the past week, and they had a conference call on Monday to talk assembling a possible 2012 campaign.

But the rub was this: There was no way Perry would run for president without his top political consultant, Dave Carney. And it also would be nice to have his former campaign manager, Rob Johnson, on board.

Unfortunately for Perry, both of those guys were working on Gingrich 2012. Carney was advising Gingrich in New Hampshire and Johnson was Gingrich’s senior political adviser. As one top Republican strategist told me on Tuesday, the canary in the coal mine for a Perry presidential run is whether Carney would leave Newt.

And IF Governor Perry gets into the race, we may finally have some sense of gravity in conservative circles. There is no doubt that Romney is in it to the end of the primary process, but in my humble opinion, adding Governor Perry to the mix eclipses his candidacy. Cain and Bachmann will still have some supporters and Ron Paul will try to influence the Republican Party Platform — but it’s all but over for them. Palin will still be there, and would make a great Secretary of the Interior in a Perry cabinet. Cain would make a great Secretary of Commerce. Bachmann should remain in the House until she can run for the Senate. Paul will still be Paul — and Mitt? Well, is there even a place at the table for Mitt Romney?