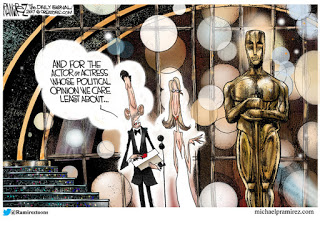 I am protesting the Oscars tonight by not watching (I usually don’t watch but I’m not watching for a reason) because the Academy and the actors, directors, producers, and so forth are all racists. If they were the least bit inclusive, they’d invite illegal aliens, radical Muslims, the homeless/hungry and others whose causes they espouse to the Oscars and to all of the after-parties. Thus they are by definition, xenophobic bigots.

They will be swilling champagne, eating caviar on crackers and congratulating each other while surrounded by walls and armed guards. Their behavior is the very marrow of progressiveness in America.
Town Hall Meetings

Republicans who are courageous enough to host town hall meetings have been shouted down by people who want to keep ObamaCare. Those citizens, most of whom were Obama voters, are too stupid to understand that most insurance carriers have dumped ObamaCare and that the program is broke. It was poorly conceived and the roll-out was nothing short of disastrous. Unless you’re in the Medicaid category of poor, what coverage remains is vastly expensive for mediocre coverage. If Congress doesn’t pass a fix, it will go broke and those unhappy voters won’t have any insurance at all.
Race Relations
File this one under: You’re only as white as you think you are.