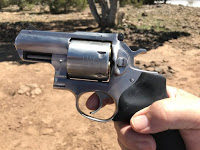 Oil
Heap Big Chief Elizabeth Warren has vowed that if she is elected president, she will stop any oil pumping on government land. Presumably she also would include natural gas. The war on coal will be expanded to become a war on oil, says Senator Warren, who is a dim bulb by anyone’s accounting. Now that the US oil reserves exceed those of the Saudis, it makes sense that Warren and the donkeys would make war on it. We surely wouldn’t want to reap the economic and strategic benefit of being an oil exporting country. Senator Warren would rather that we import oil. She really is dumber than a bag of hammers, but that can be said for a lot of politicians.
Under the Trump Administration, the US will no longer exempt any countries from sanctions for importing Iranian oil. The message is clear. You can do business with the US or you can do business with Iran, as you please — but not both. Iran is finding the new American president less of an easy mark than his predecessor, the feckless and foolish Obama (architect of the Obamanation).
Between Walk-About and April Showers
As I prepare to head out and earn my daily bread, toiling at the salt mine, I decided that I needed to make a run to look for Buffalo. I heard that there were a few big shaggies that stomped off to the west, as they are prone to do – well away from the managed Raymond Ranch Herd. Long Lake and Soldier Lake sometimes host the bison as they move west. I had no intention of poaching one, but when in the remote reaches of Central Arizona, it’s good to have the means of self defense. (see right)
Coming up from the south on County Road 211, I encountered this sign (see below). 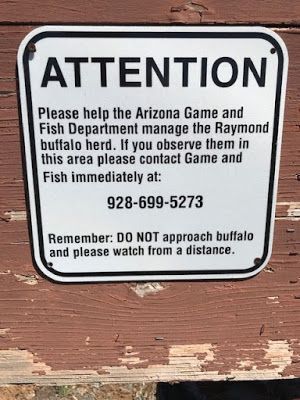 Being thus encouraged by previous situations that prompted the Wildlife management people to post the sign, I increased my vigilance. The plot thickens.
County Road 211 is not that bad. It’s a rutted, dirt road that allows for travel up to about 20 mph without discomfort.
I knew that I’d have to beat the afternoon showers that we get in the high mountain areas, so did not doddle.
Not everyone found the road easy going. 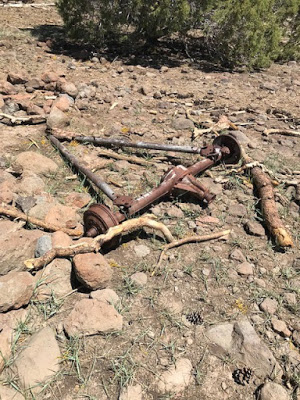 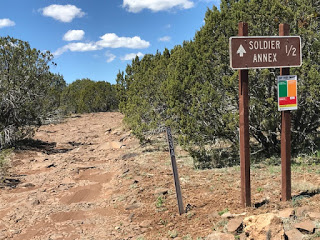 Arriving at Soldier Lake, the road deteriorated a bit. It’s the road less traveled, and I didn’t have to shift from 2X4 to 4 high. Just a little rocky and untraveled.
Soldier Lake is full of water, and yes, LSP, I should have brought fishing tackle, but I was looking for bigger game than a blue gill.
I made my way around much of the lake and there was no sign of the elusive bison. There was a fish-and-game helicopter circling the area, so I felt that at least my intelligence source was potentially sound.
Traveling north from there I found out that County Road 82 between Soldier Lake and Mud Lake (which was also filled with water) was ‘unimproved’. I didn’t have to gear down but it was a 5 mph road. Between Cow Lake and Mud Lake, I spotted three pronghorn antelope. They were more curious than suspicious and lingered out at about 100 yards. The camera in the I-Phone made them look like brown and white spots. So no video log of that activity. I ate my lunch and watched the antelope look at me, Then continued on to Mormon Lake and Mary’s Lake Road, and headed back to the shack.