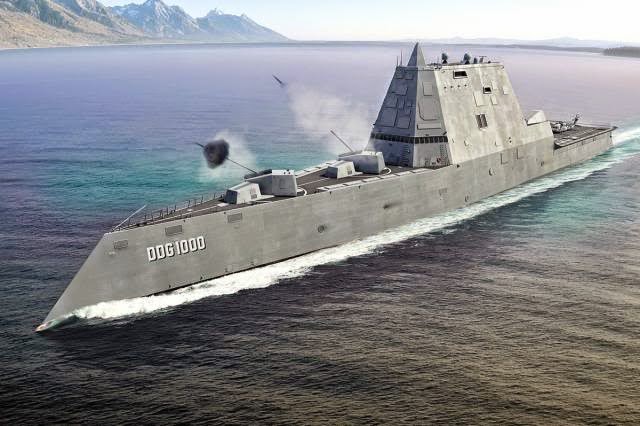 USS Zumwalt (DDG-1000) is 100 ft. longer than an Arleigh Burke Class destroyer, but they are still calling Zumwalt a destroyer. The word, “cruiser” has apparently gone out of naval fashion. I’m not sure why, but it has. USS Zumwalt is a stealth ship with a small radar cross section that’s about 10% of her size. On radar, it would look like a yacht or a fishing boat.
Despite rumors that the launch of Zumwalt would be delayed until early 2014, the vessel was launched from its shipyard in Bath, Maine on 29 October 2013. The builders have completed extensive testing from what I’ve been told and the ship will be delivered to the US Navy later this month or in January with initial operating capability reached later next year.

I find it interesting that the Navy only plans to build three of them. It may have to do with the $7 billion (each) price tag.  Anyway, not to worry, we’re going back to the old Arleigh Burke Class with a modernized design to allow it to carry more ‘potent’ weapons including lasers. USS Michael Murphy was originally intended to be the last of the Arleigh Burke class. The new version of the Arleigh Burke destroyers is referred to as the Flight III variant As many as 42 Flight III ships are expected to be procured by the U.S. Navy with the first ship entering service in 2023.
The Problem:
The US Navy’s fleet is aging. The US is not producing Naval ships fast enough to replace the ships that are going out of service — possibly because 1/5 of Americans are receiving food stamps and social spending to buy votes has been the national political posture.
There are also manning and operational difficulties that have to do with national funding priorities.
I understand. Nobody wants to spend money on a navy…until they need it. Then a new class of ships will roll off the chalks over a decade later.