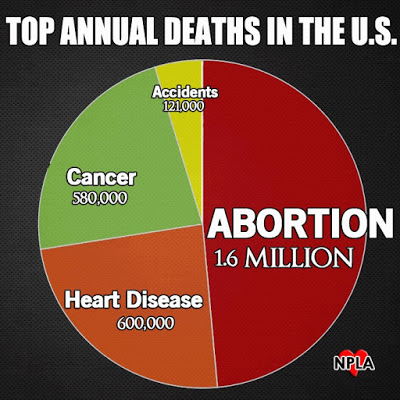 For the record, I don’t oppose abortion in incidences of rape, incest or the life of the mother. However rape, incest and maternal jeopardy doesn’t account for 1.6 million deaths per year.
When I was a boy, I read stories like Huxley’s Brave New World and Orwell’s 1984. The books predicted dystopian futures. Never in any of the most outlandish did the US Govt. fund abortions which generated a booming business in dead baby parts in the scale that we’ve seen. Even in the most ghoulish vampire or zombie movies, this concept has not been visited by science fiction or horror genres.
But it’s been made manifest and with the uncloaking of an awful truth, we’ve seen the White House and key leaders throwing up barriers to protect the practice that is so unnatural, that even horror films didn’t tread there.
Society’s advances from the Dark Ages (many will argue that Islam exempted itself and is still living in the Dark Ages) has been largely the result of the classic protestant work ethic. The Europeans who settled the Americas were Christians, who believed that sodomy was an abomination, that corruption was wrong and held to the Ten Commandments.
Even in Sodom, babies were not ripped from mother’s wombs for experimentation. The Nazis were likely doing it. Maybe the World War Two Japanese? Now America has embraced it.
And we will reap a bitter harvest if we don’t stop it.