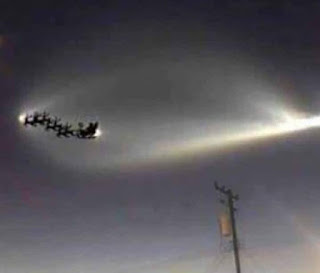 Facebook
Twitter
Pinterest
WhatsApp
There was a segment on Fox News where the aviators who took gun camera footage of the UFO’s shared their opinions that we were not alone… According to what they said, the Nimitz had been tracking unusual aircraft and their encounter was the only time that the ship had aircraft (2 in this case) aloft to confront the alien craft, reportedly looking like a ‘big tic tac’.

Then there was the Space X launch of a Falcon rocket that caused a lot of hubbub on the run up to Christmas that wasn’t actually a Space X launch (see photo). Santa was working on his new and improved sleigh and needed to test it before tonight (the big night). Thank you Space X for providing cover for that.
Is Santa an alien? Does he warehouse the sleigh at Area 51 during the off season? We don’t really know the answer do we? (“we” do, of course, but “we” don’t share it)
So are they little green “elves” or are they space aliens? NORAD isn’t confirming or denying, but President Trump was taking calls from the NORAD tracking system this afternoon.
The naval aviators who took the gun camera footage of aliens that you’ve seen on the news affirm their own personal beliefs that ‘we are not alone’. But Santa really answers that question for us. 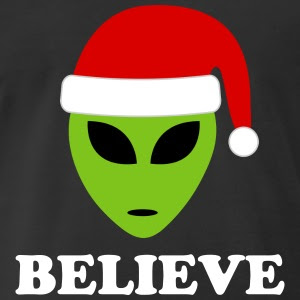