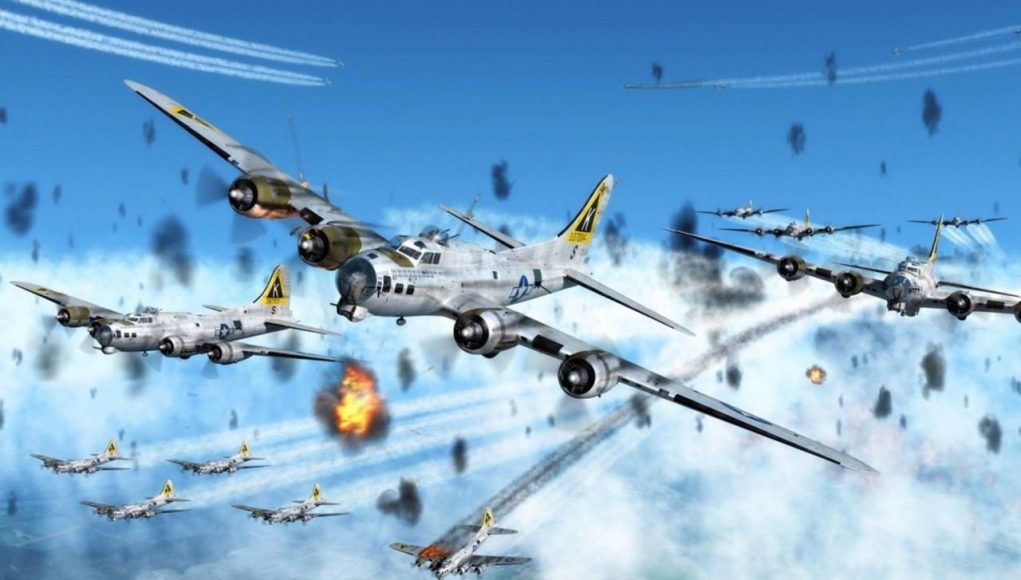 Yesterday – as in literally, yesterday — in Aviation 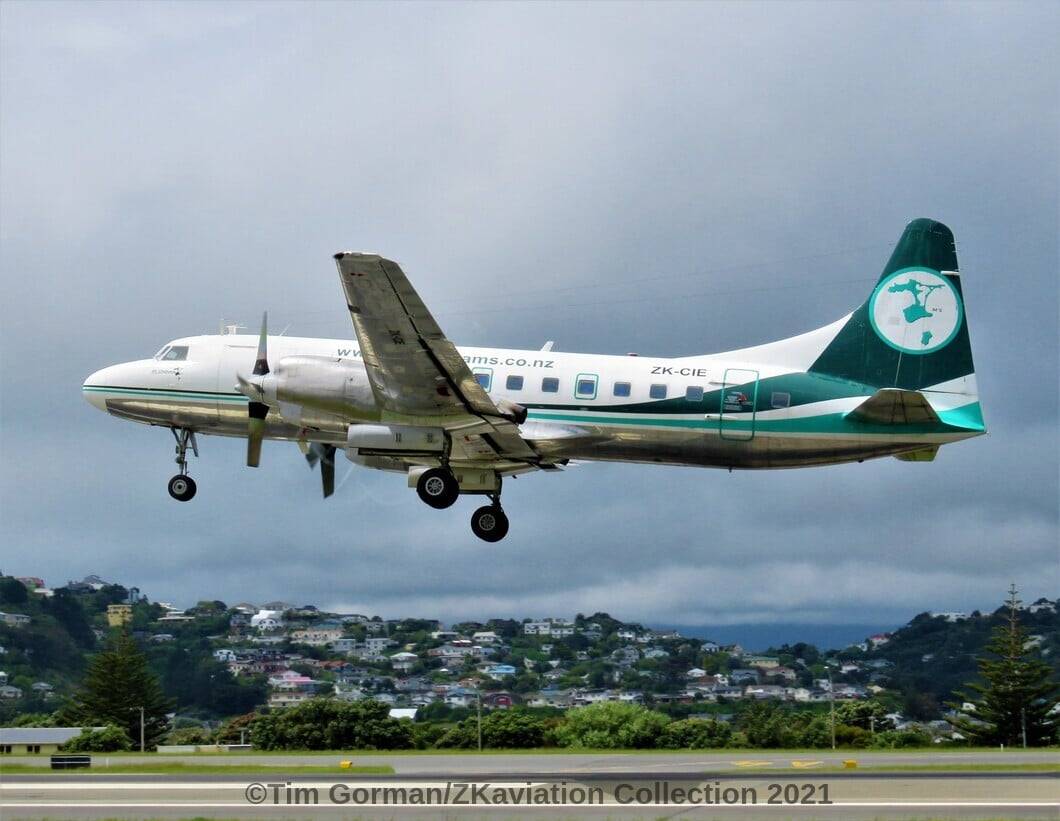 Air Chathams Convair 580, the last one in active passenger service worldwide, was permanently grounded yesterday after 64 years of operation

A mid-air collision on February 1, 1943, between a B-17 and a German fighter over the Tunis dock area, became the subject of one of the most famous photographs of WWII. 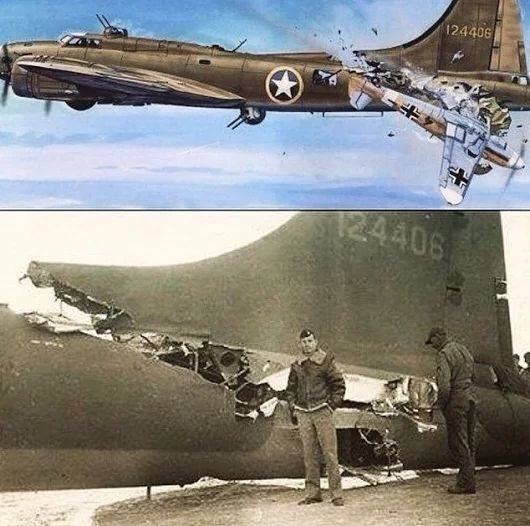 An enemy fighter attacking a 97th Bomb Group formation went out of control, probably with a wounded pilot then continued its crashing descent into the rear of the fuselage of a Flying Fortress named “All American”, piloted by Lt. Kendrick R. Bragg, of the 414th Bomb Squadron.

When it struck, the fighter broke apart but left some pieces in the B-17. The left horizontal stabilizer of the Fortress and left elevator were completely torn away. The two right engines were out and one on the left had a serious oil pump leak. The vertical stabilizer (tail) and the rudder had been damaged, the fuselage had been cut almost completely through, connected only at two small parts of the frame and the radios, electrical, and oxygen systems were damaged. There was also a hole in the top that was over 16 feet long and 4 feet wide at its widest and the split in the fuselage went all the way to the top gunner’s turret.

Although the tail actually bounced and swayed in the wind and twisted when the plane turned and all the control cables were severed, except one single elevator cable still worked, and the aircraft still flew! The tail gunner was trapped because there was no deck connecting the tail to the rest of the plane. The waist and tail gunners used parts of the German fighter and their own parachute harnesses in an attempt to keep the tail from ripping off and the two sides of the fuselage from splitting apart. While the crew was trying to keep the bomber from coming apart, the pilot continued on his bomb run and released his bombs over the target.

When the bomb bay doors were opened, the wind turbulence was so great that it blew one of the waist gunners into the broken tail section. It took several minutes and four crew members to pass him ropes from parachutes and haul him back into the forward part of the plane. When they tried to do the same for the tail gunner, the tail began flapping so hard that it began to break off. The weight of the gunner was adding some stability to the tail section, so he went back to his position.

The turn back toward England had to be very slow to keep the tail from twisting off. They covered almost 70 miles to make the turn home. The bomber was so badly damaged that it was losing altitude and speed and was soon alone in the sky. For a brief time, two more Me-109 German fighters attacked the All American. Despite the extensive damage, all of the machine gunners were able to respond to these attacks and soon drove off the fighters. The two waist gunners stood up with their heads sticking out through the hole in the top of the fuselage to aim and fire their machine guns. The tail gunner had to shoot in short bursts because the recoil was actually causing the plane to turn.

Allied P-51 fighters intercepted the “All American” as it crossed over the Channel and took the picture shown. They also radioed to the base describing that the appendage was waving like a fishtail and that the plane would not make it and to send out boats to rescue the crew when they bailed out. The fighters stayed with the Fortress taking hand signals from Lt. Bragg and relaying them to the base. Lt. Bragg signaled that 5 parachutes and the spare had been “used” so five of the crew could not bailout. He made the decision that if they could not bail out safely, then he would stay with the plane to land it.

Two and a half hours after being hit, the aircraft made its final turn to line up with the runway while it was still over 40 miles away. It descended into an emergency landing and a normal roll-out on its landing gear. When the ambulance pulled alongside, it was waved off because not a single member of the crew had been injured. No one could believe that the aircraft could still fly in such a condition. The Fortress sat placidly until the crew all exited through the door in the fuselage and the tail gunner had climbed down a ladder, at which time the entire rear section of the aircraft collapsed. This old bird had done its job and brought the crew home and all in one piece. 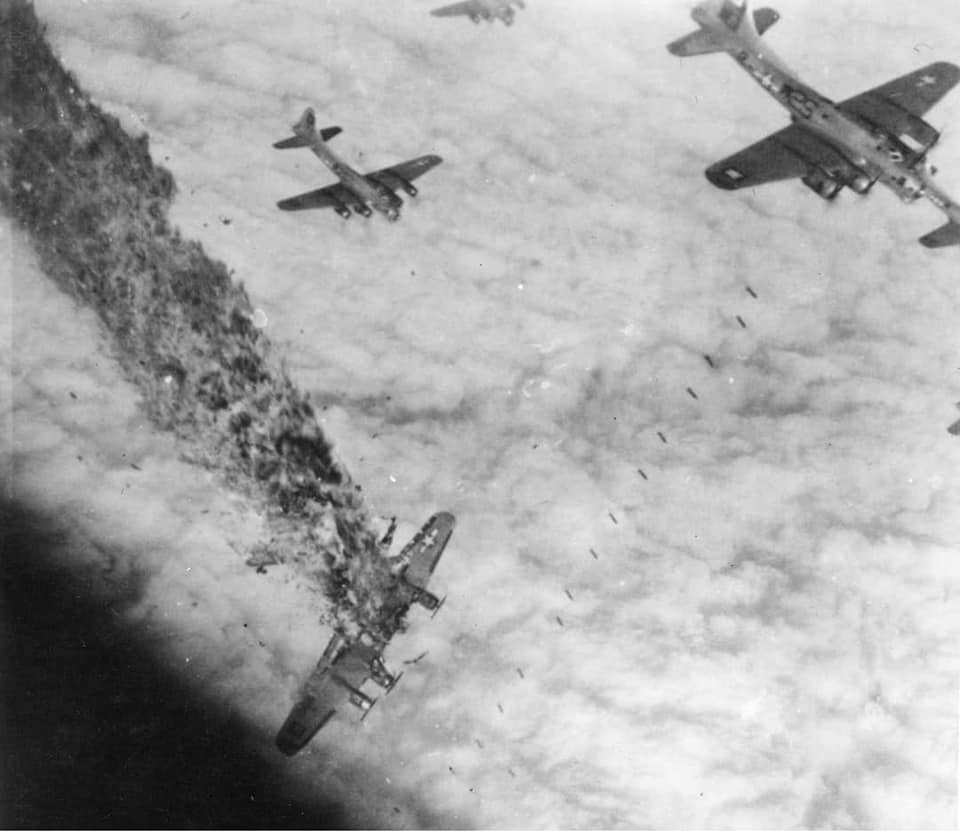 “If you come across something awful happening, you always think, ‘My God, it’s just like a movie,’ and that’s what I thought. I had a feeling that the planes weren’t really falling and burning, the men inside them weren’t really dying, and everything would turn out happily in the end. Then, very quietly through the interphone, our tail gunner said, ‘I’m sorry, sir, I’ve been hit.’

I crawled back to him and found that he’d been shot in the side of the head and blinded by bursting plexiglass. He was still able to use his hands, so I ordered him to fire his guns whenever he heard from me. I figured that a few bursts would keep Jerry off our tail, and give the kid something to think about besides the fact that he was dying.

Then, screaming in from someplace, a 20 mm cannon shell exploded in the nose of our plane, hitting me in the shoulder.

Two more shells had hit the waist of the plane, exploding the cartridge belts stored there, wounding the waist gunner in the forehead and jugular vein. We had no plasma aboard, so there wasn’t much of anything else I could do besides plug his artery with my fingers and give him morphine.

When we reached England, I prayed and thanked God. 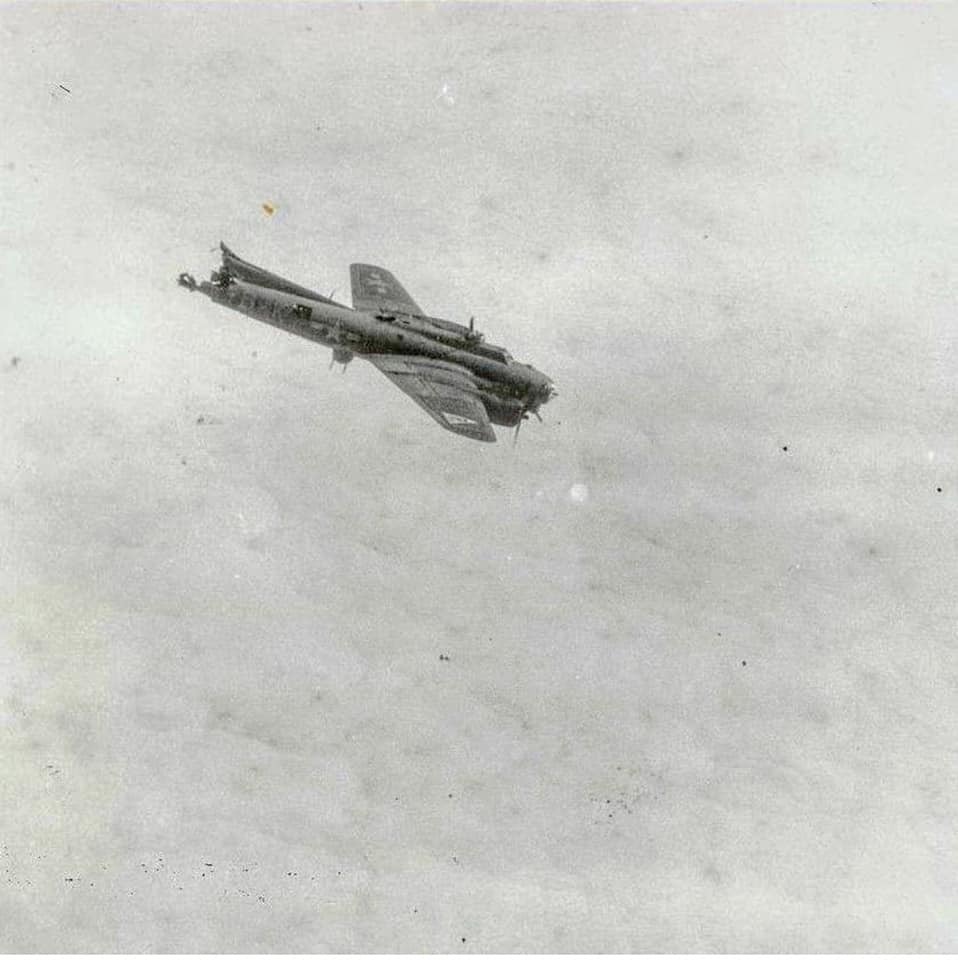 On the following mission, the waist gunner was now a new, young kid; like the kid, I’d been six months before.

He wasn’t a bit scared – just cocky and excited. Over Saarbriicken he was wounded in the foot by a shell, and I had to give him first aid. He acted more surprised than hurt. He had a look on his face like a child who was cheated by grownups. 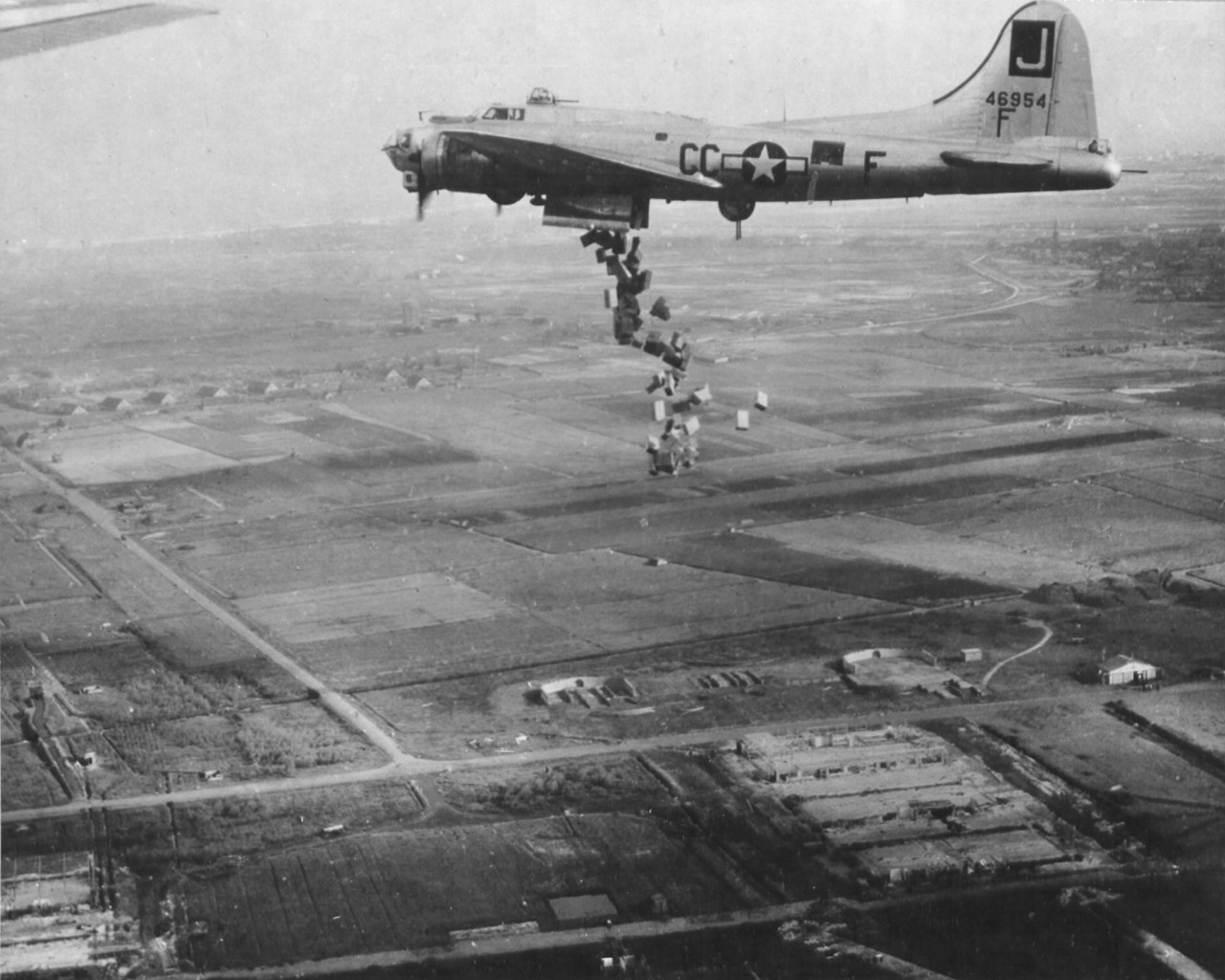 B-17G Fortress “Liquid-8-Or” of 569th Bomb Squadron dropping cases of “10 in 1” rations into Holland during Operation Chowhound aimed at breaking the famine in western Holland, May 3, 1945. 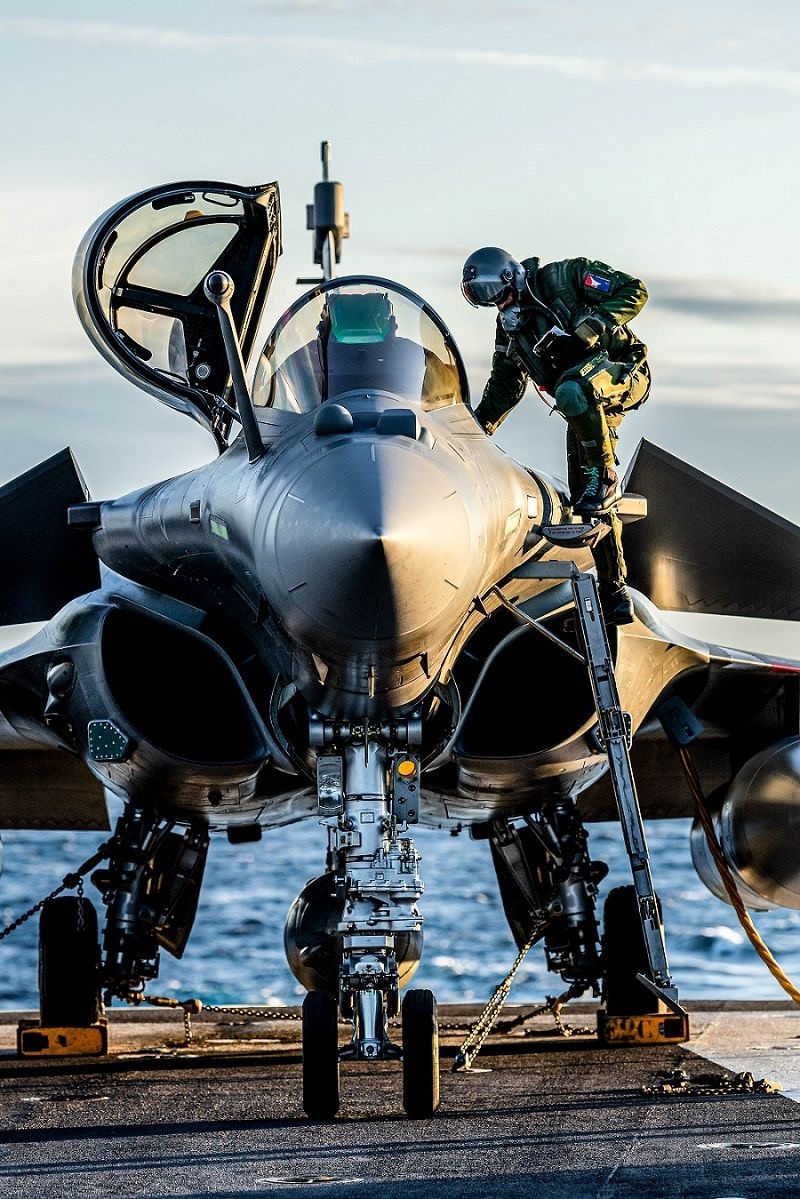 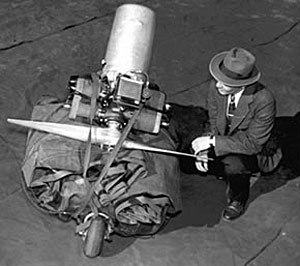 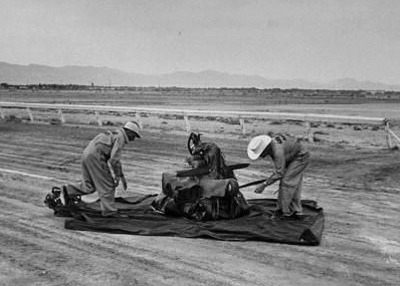 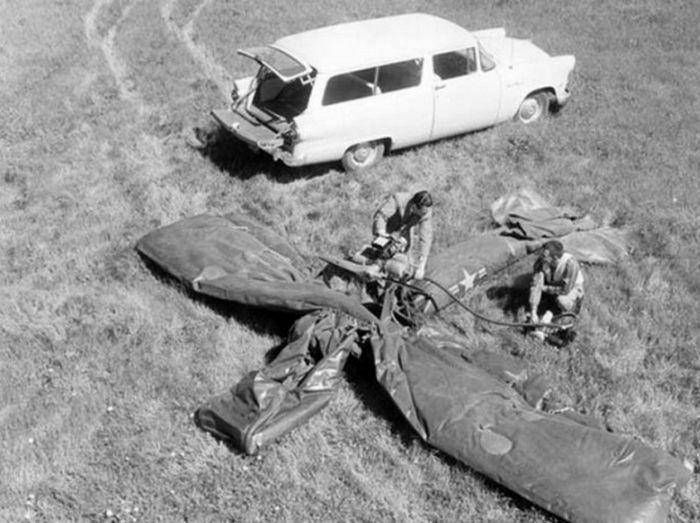 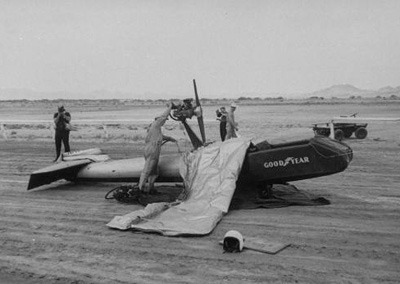 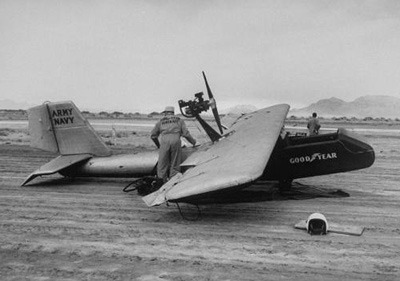 You know that they had a big tire patch kit that came with the airplane. 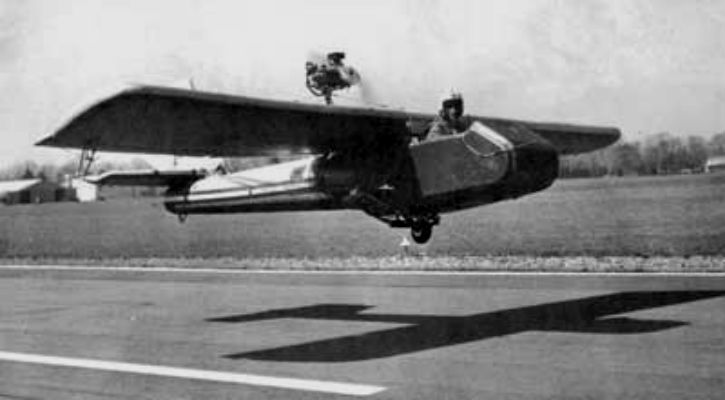 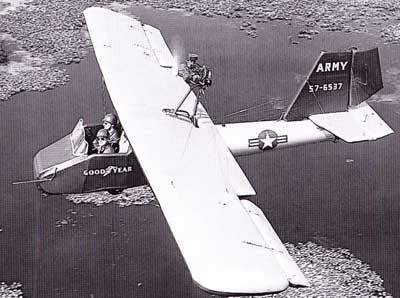 Not unlike this in concept – not really. 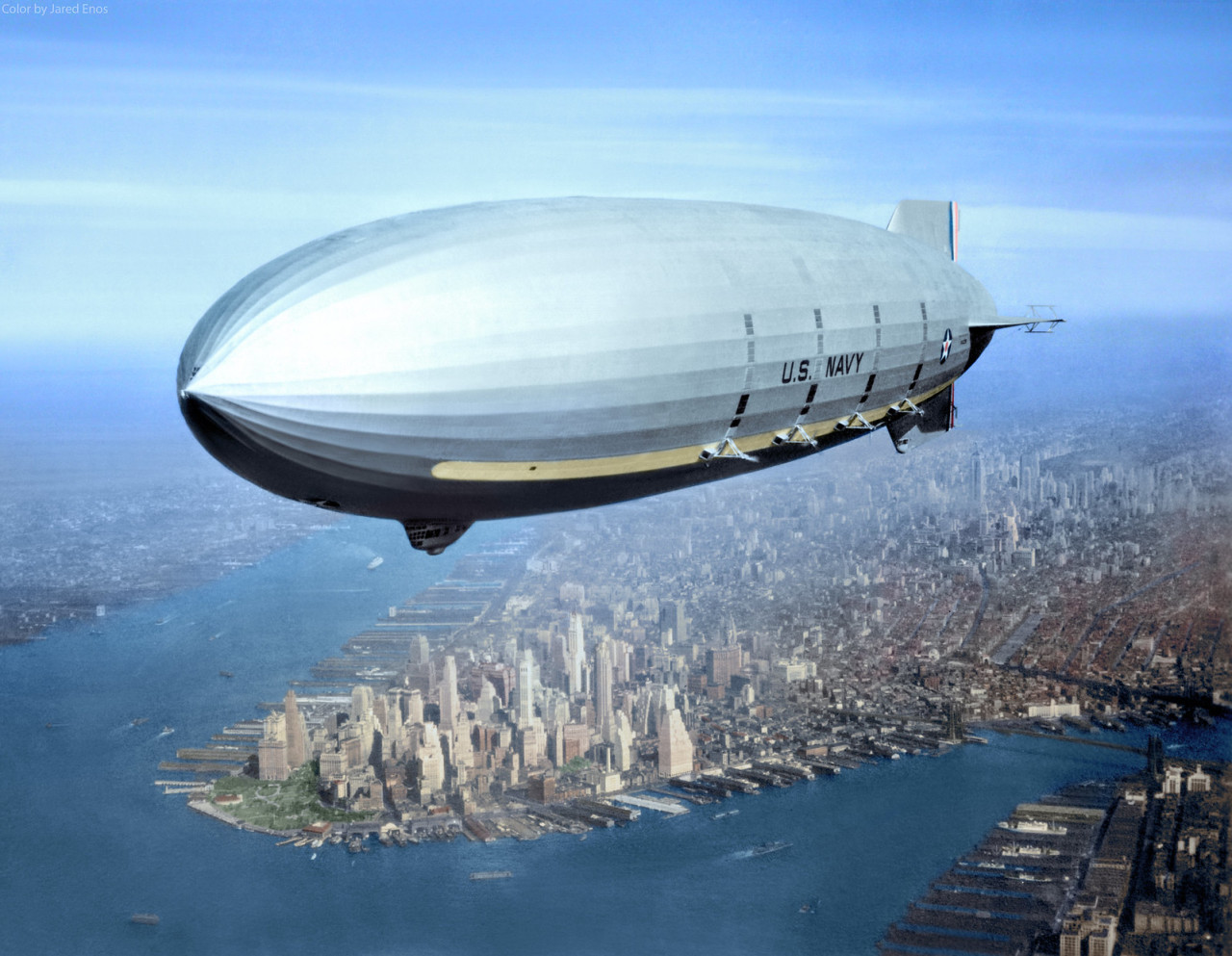 USS Macon Flying over New York Harbor, circa Summer 1933. The southern end of Manhattan Island is visible in the lower left-center.