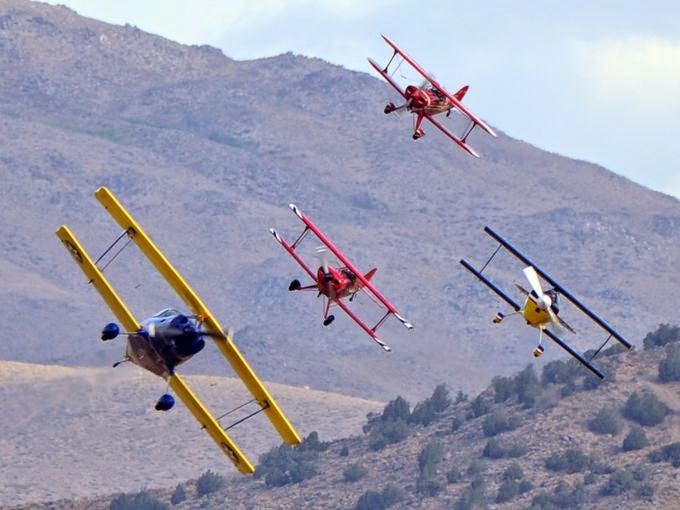 The National Championship Air Races will begin next week in Reno, NV. This is your count-down to the world’s fastest motor sport – 2014. Some of the highlights of those races will be featured on this blog since I’ll be there all week with my camera and unlimited and unfettered access from the aircraft pits and shops to the flight line. (I should have been a reporter for Fox News, but I fear that I’m nowhere near pretty enough)

The Air Races feature multi-lap, multi-aircraft races between extremely high performance aircraft on closed ovoid courses, which range between about 3 miles (Biplanes and Formula One) and about 8 miles (Jet, Unlimited) in length per lap.
The first Reno air races, in 1964 and 1965, took place at Sky Ranch airfield, a dirt strip barely 2,000 feet (610 m) long, which was located in present-day Spanish Springs (near Reno). After Stead Air Force Base was closed in 1966, that field was turned over for public use and the races have been held there since then.
Reno-Stead Airport today is being reborn once again as the UAV test flight center for Northern Nevada. There will be a “DRONE ZONE” at the air races for the first time this year. The FAA will not let drone aircraft race each other unless they are inside of a tent or netted enclosure…unless children want to race them as privately owned (no insurance) hobby aircraft. Then they can race where and when they want to.