Who cares? But here it is Anyway! 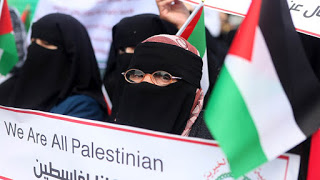 No we’re not all Palestinians

I don’t have an axe to grind with Palestinians in “Palestine” (except there really isn’t a ‘Palestine’), nor do I have a problem with Syrians in Syria. I’m a bit annoyed with them when they’re down the street at the mosque and they act as if I should give a rat’s ass, which I don’t. For the record, if a Palestinian virus struck them all dead today, we’d need to dig a bunch of slit trenches with back hoes to bury them and the fuel those machines exude allegedly create the weather/climate change, and naturally that would bother me if it rained on a day when I wanted to take my motorcycle out for a spin.
Does that make me intolerant? Absolutely. They flee the despotism of Islam and their filthy, violent homelands and come here, wanting to bring the same violence and despotism of faith. No thanks, go back home, strap a bomb to yourself and blow yourself up. If nobody buries your parts, the dogs will eat you and cycle you back to fertilizer. The liberals howl that Trump wants a moratorium on allowing more Muslims into America, until we can get a handle on it, but that’s precisely why people vote for him. America is tired of losing — and we’ve lost big under Barack and friends.
The Football metric – and Bernie Sanders 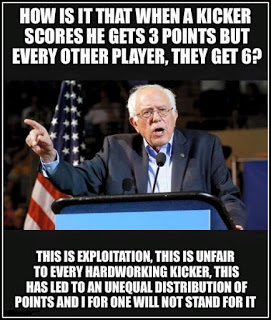 Rasmussen Polling
Former New York Mayor Michael Bloomberg has made it official that he is considering entering this year’s presidential race as an independent. Early polling suggests a Bloomberg candidacy would be good for Donald Trump and bad for Hillary Clinton, provided that Clinton can stay out of prison. Most feel that President Obama would pardon her, but she’d be out of the running for the presidency this time around…She’d be 76 in eight years, pardoned from all crime by Barack, and ready to hit the campaign trail with Humma again.
Race Baiter, Al Sharpton, is feeling the Bern

It’s worth it for Sharpton to throw whatever support those narrow shoulders are capable of moving to Bernie Sanders in the off chance that he will become president. Obama has shielded Sharpton from prison for tax evasion, arson and a long list of other crimes. Yes, Sharpton will tap dance before the 74 year old senile communist if he can stay free and can feast on the scraps from Bernie’s table.

Sanders has not been quite as popular with black people as Hillary, who had declared herself “part black” if she can get their vote. Given that Sanders’ campaign swings on the concept of handing out free stuff to all, he should be popular in the ghetto, doubling down on free ObamaPhones, cheese and food stamps that can be easily swapped for illegal narcotics. It’s worth noting that part of Sanders’ campaign has also been a promise to release black felons from prison until the population ratio with whites has been reached and is in balance. That may work in Sharpton’s favor too if Bernie forgets his promise to pardon Al.