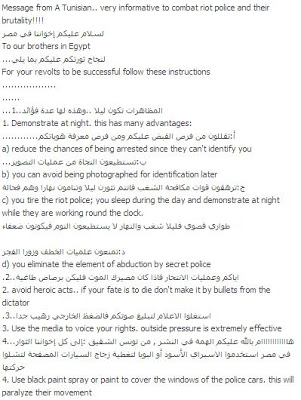 SOURCE: (LINK HERE) is one of the reasons why the Egyptian government has worked to block Twitter in Egypt.
The Egyptian operational plan has been previously published and it might aid those who are interested in the politics and evolution of the situation to read it (LINK HERE). The Op. Plan which has been widely circulated on Twitter was also picked up by the Atlantic Monthly.

Though I’m not ‘breaking news’ by any means, the people interested in communicating via internet in Egypt are successfully doing so through the use of dial-up modems. So while the Egyptian government has taken out some of the routing capabilities of networked servers, that is being circumvented through the use of the telephone system, which is still operating. (READ MORE HERE – LINK)
For the most part, the outcomes of these sorts of uprisings in the Middle East create a worse situation than the one that previously existed. I’m not predicting doom and gloom by any means, merely looking at the past and projecting previous results to the present situation.