He wanted very much for his son, Gamal, to become the next strongman-for-life in Egypt, but nobody else in Egypt saw it that way.  There was going to be a minor civil war when Hosni Mubarak died as the army, the rich merchants (bazar) and possibly others grappled for the brass ring. Omar Suleiman, head of the Egyptian Intelligence Service is now Vice President as a hedge against things getting too far out of hand in the elitist circles, but nobody knows who will have a chair when the music stops, do they?
The demonstrators are the wild card in the current ‘crisis in Egypt’ and there is no question but what the Muslim Brothers follow the Rahm Emanuel doctrine that there’s no such thing as a “bad crisis”.  For the moment, there seem to be many factions of demonstrators and they all want something different. The Egyptian economy is very bad and unless the democratic reformers can offer something substantive, they’re unlikely to prevail. The same runs true for the radical Muslims, who can only offer 70 virgins after they’re dead.
The Egyptian outcome has less to do with what Iran or Americas want than what the Egyptian people perceive to be the course that puts more food in their bellies. The Army remains intact and is not deserting the way the Iranian army did under the Shah – at least not yet. The Army will support the power elite that rules in Egypt and as cooler heads prevail, they are likely to be the broker that cuts a deal in the short term (which would leave Mubarak in charge but politically weaker).

And from one of my contacts in Egypt: 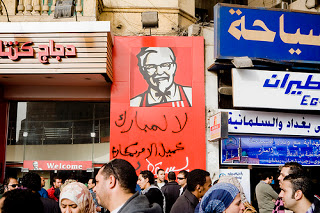 Note the picture of Col. Sanders defaced in Cairo – do these people have any limits?