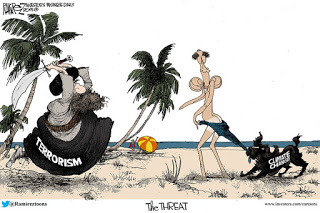 I’m still waiting for the progressive left to explain their proposed theoretical nexus between global warming (no proof of it but they promise that it’s coming) and angry Muslims. Near as I can tell, as long ago as 2000 BC the Middle East was a desert – back when they burned camel dung to keep warm. Now, apparently, they’re upset that they live in a desert and feel that because I drive a gas guzzling car (that they supply with oil) that it’s all so unfair.
And to retaliate against the weather, they travel to European countries and to the US to kill innocent people sitting down to supper. John Kerry says that it makes sense to him, right? Barack says that it makes sense to him as it does to Bernie Sanders.
What am I missing?