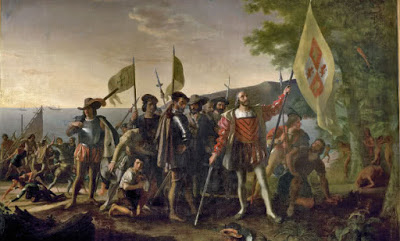 Facebook
Twitter
Pinterest
WhatsApp
Happy Columbus Day
It’s a day to celebrate the discovery of the New World if you’re a regular person doing the regular thing. If you’re Italian, you have the right to go semi-crazy (in much the same way as the Irish do on St. Patrick’s Day) — but you don’t have green beer, and more’s the pity.

If you’re angry at everyone and everything it’s the perfect day for a protest of whatever irks you – the discovery of the New World, Islamophobia, and a lot of trigger words that it may be politically incorrect if I use because they — trigger you.

The Nina, Pinta and Santa Maria were not racially integrated ships, and that is enough to make your heart flutter with rage, isn’t it?

The Mandalay Bay Shooter may have gone insane because he wasn’t Italian and always wanted to be. Or maybe he always wanted to be a cowboy growing up and the other kids made him an Indian/Indigenous Person? Fashion standards of the 1490’s called for all men to wear tights, which would have pleased the trannies. Why doesn’t Bruce Genner and friends come out in support for Columbus?

Maybe none of the items mentioned above have triggered liberals to hate Columbus, progressives blame everyone including the Cat-in-the-Hat. Maybe the progressives will host a book burning of all the books they don’t like? Sort of a Fahrenheit 451 party (good any day but why not Columbus Day!

Maybe all of the Democrat hopefuls could go running through the Library of Congress with torches? Biden is getting old and so is Pelosi. They could drive those motorized carts.

We know that upon reaching the West Indies, Columbus and crew landed and the first thing that they did was to pray. That’s not a very progressive thing to do, but they did it anyway. They thanked God for a safe journey over the great deep. Some people view the day as a day of thanksgiving (sort of a pre-Thanksgiving). Others in the US Federal Government take the day off work as possibly the last long weekend before the weather gets really rough in winter. I may cook spaghetti because Colombus’ fellow explorers brought back the tomato from the New World – an essential ingredient in both spaghetti, the BLT sandwich and pizza. (heap cheese on the pizza and spaghetti, but not your BLT)

There will be Columbus Day Parades in New York City, Boston and Philadelphia (City of Brotherly Love). I can only hope that the progressives stay home and don’t shoot up any of the parades.

However you celebrate or protest,
I hope you have a nice day.


If the Feds have taken the day off
so should you!