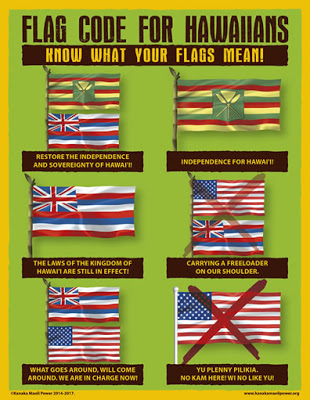 I don’t know how many of you are aware of the growing movement in Hawaii for secession from the United States. The method for this is to declare the islands an Indian Reservation, thus a “sovereign nation”. (freehawaii.org)

Wikipedia’s List of Hawaiian Independence Organizations
(Fox News) HONOLULU – A U.S. Supreme Court justice on Friday issued a temporary stay blocking the counting of votes in an election that would be a significant step toward Native Hawaiian self-governance.
Justice Anthony Kennedy’s order also stops the certification of any winners pending further direction from him or the entire court.
Native Hawaiians are voting to elect delegates for a convention next year to come up with a self-governance document to be ratified by Native Hawaiians. Voting ends Monday.
A group of Native Hawaiians and non-Hawaiians is challenging the election, arguing Hawaii residents who don’t have Native Hawaiian ancestry are being excluded from the vote. It’s unconstitutional for the state to be involved in a racially exclusive election, they say.

…Those who support the election say it’s an opportunity to create their own government for the first time since 1893, when American businessmen — backed by U.S. Marines — overthrew the Hawaiian Kingdom.
And how different is that from the South’s move to secede from the Union in 1860?
Of course, it’s all about power.

The Hawaiian economy is tied to tourism and to military bases that keep things rolling. It’s also tied to a vast number of people on welfare. Where do they think the money will come from when the welfare is turned off, the military leaves and tourism dwindles as infrastructure crumbles?