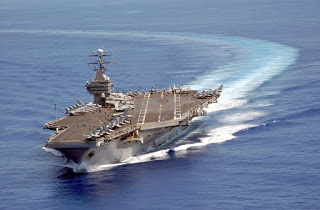 The first questioner asked for China’s response to the announcement. “The United States has announced that it is sending an aircraft carrier battle group to the South China Sea to carry out regular patrols. What is the Chinese side’s response to that?”

Geng replied, “The Chinese side has noted relevant reports. The Chinese side always respects the freedom of navigation and over-flight that countries enjoy in the South China Sea under international law. But we oppose relevant countries’ threatening and undermining sovereignty and security of coastal countries under the banner of ‘freedom of navigation and over-flight.’ We hope that relevant countries can do more things that are conducive to maintaining regional peace and stability.”
The second questioner asked whether the nature of the US ships undertaking regular patrols was considered a provocation.
Geng answered, “Thanks to the concerted efforts by China and the Association of Southeast Asian Nations (ASEAN) countries, the situation in the South China is on the course of stability and developing in a positive direction and in the direction of turning for the better. We have stated multiple times that it is hoped that relevant countries, in particular countries outside the region, can respect the efforts made by China and ASEAN countries, help maintain and consolidate the excellent and positive momentum at present, and do more things that are conducive to maintaining peace and stability in the South China Sea.”

The US announcement has gotten the attention of the Chinese leadership. Geng Sheng’s remarks are temperate, but do not reflect the views of Chinese generals and admirals and the top party leadership. They almost certainly do consider the US action to be provocative.
The underlying Foreign Ministry message is that the US Navy does not need to patrol in the South China Sea because the nations around the South China Sea have worked out or are working out all the issues. The US presence will just mess things up by threatening peace and stability.
The positive momentum means that China, in the absence of US naval patrols, has been having success in persuading the other countries that rim the South China Sea to accept Chinese hegemony.

The other Chinese ministries may be expected to have much stronger reactions. The US battle group should expect harassing actions along with the usual Chinese escort and surveillance ships that always tail and monitor US Navy ships in the South China Sea.
President Trump is announcing that the US has returned and that the eight failed, miserable, years when Barack was commander-in-chief, are over. China can do little but wait President Trump out and hope that he’s replaced by another “post-American” president such as Obama was. However China does not want to gamble that Trump won’d be re-elected and that VP Mike Pence won’t replace him in eight years, and thus they don’t want to spend eight or possibly sixteen years waiting. They plan to make a positive spin on things by working with the US where they are able.
That brings us to North Korea and the Six Party Talks. An Op Ed piece in China’s Global Times on 22 February said that it is time for the Six Party Talks to resume. You’ll recall that the Global Times is the media instrument where the PRC announces things without doing it formally. Thus if you’re interested in what China is up to, you read their publication.

“China has announced it would ban all coal imports from North Korea until the end of the year, which shows Beijing’s resolve to implement UN Security Council resolutions punishing North Korea over its nuclear program. It is now time for the US and South Korea to make constructive actions to create conditions to solve the conundrum.”

The commentary argued that the North Korean nuclear issue is deadlocked. The US and South Korea have no new tactics for compelling North Korea to give up its nuclear weapons program, other than to exert more pressure.

“But the situation is not as easy as that, especially given that North Korea firmly believes nuclear weapons are important tools, and that it has made huge sacrifices to develop nuclear weapons.”
“Those who believe Beijing should do more or that Beijing holds the key to solving the North Korean nuclear issue are either ignorant or calculating strategists. They are the ones who complicate the issue.”
“The US and South Korea must continue to engage with Pyongyang while imposing sanctions on it. They should give Pyongyang a choice rather than making it believe that no matter what it does, the two will overthrow its regime anyway. Engaging with Pyongyang isn’t more difficult than Pyongyang giving up its nuclear ambitions.”
“It’s time to restart the Six-Party Talks. The last talks were held in 2007, and North Korea, the US and South Korea have since refused to return to the negotiating table. They have set preconditions for rebooting the talks. But in the past decade, disengagement between the two sides ended up nowhere.”
“Is North Korea safer than it was 10 years ago? Does South Korea have more strategic leverage? Has the US brought North Korea to its knees?”
“There are only two solutions to break the deadlock between the US, South Korea and North Korea – a war or a turning point in coexistence. US President Donald Trump even wants to improve ties with a strategic adversary as Russia. North Korea is comparatively only an imaginary enemy. The North Korean nuclear issue requires efforts on all parties, and we hope Trump has the resolve to make those efforts.”
“Owning nuclear weapons will only bring isolation and more danger to North Korea. The Six-Party Talks are a good opportunity for all stakeholders to engage with each other. China supports any move that helps stabilize the Korean Peninsula. It is time for South Korea, the US and North Korea to engage with each other.”

The Global Times Op Ed piece suggests that those experts and analysts who judged that the suspension of coal imports is a pressure tactic for the US to do more, were essentially correct. China expects the US to support a resumption of the Six Party Talks in return for the suspension of coal imports.
The Op Ed piece has a flaw in its reasoning. By imposing the coal import suspension, China just proved correct those who have argued that China was not doing all it could to enforce UN sanctions. It is fallacious to argue that tighter sanctions on North Korea will not work. China’s recent action shows they have not been tried yet. China can do more.
Similarly, it is premature to label tighter sanctions a failure when the first potentially damaging sanctions have been in place for two days. It is time to wait to determine whether the latest sanctions bite and how hard.
As for the Six Party Talks, North Korean leader Kim Jong Un already has denounced those talks and declared that North Korea will never return to them. His actions in testing ballistic missiles, submarines and nuclear devices indicate that he is serious. The Six Party Talks are almost the embodiment of deadlock. They accomplished nothing compared to the Agreed Framework under the Clinton administration.

In every contest, there are always five possible solutions for each round: win; lose; draw; pass; change the rules; quit.

The Obama Administration’s policy of strategic patience is a “pass” move. The substance of a pass move is to do nothing until a better round emerges or better opportunities appear. The problem with the pass move on North Korea is that it failed to restrain North Korea from detonating nuclear devices or testing missile. Pass moves seem safe, but can lead to a deteriorating strategic position because they impose no burden on the other players. Pass moves are usually risk averse, hope for change moves. The best move is almost always change the rules, which is another way of saying cheat in some senses.

Context and Precedence
The Agreed Framework between the US and North Korea, signed in 1994 during the Clinton administration, was a change the rules move that froze the North’s nuclear program; subjected it to International Atomic Energy Agency supervision and controls and opened North Korea more than any policy since the end of the Korean War. It was the only time that US Department of Energy engineers and Department of State personnel lived and worked at the Yongbyon nuclear station with North Korean engineers.
It broke down in 2003, but no one expected it to last almost ten years. During those years, there were no nuclear tests and no strategic missile launches.
The resumption of the Six Party Talks is a “draw” move that does not solve the nuclear problem. It is unclear why Chinese President Xi Jingping considers the Talks to be a “win” move, when they have been deadlocked since 2007.
None of the parties to the Talks (China, US, Russia, Japan, South Korea, North Korea) has surfaced a new idea that could change the rules without using violence. All of northeast Asia is less safe because of the weak policies of the non-North Korean members of the Talks group since 2007.
The Trump Administration understands that military strength is the only thing that the North Koreans (Norks) understand. Thus, it is likely to join with China in demanding that the Six-Party Talks resume while at the same time increasing the capacity of the US to respond to North Korean hostility with kinetic force.