China Cautions the US over North Korea

This from the People’s Republic of China: (REUTERS – LINK) “We oppose any military act by any party conducted in China’s exclusive economic zone without approval,” China’s Foreign Ministry said in an online response to a question regarding China’s position on the George Washington participating in joint naval exercises. This is the first reaction to the US moving the USS George Washington (CVN 73) into the Yellow Sea. As far as China is concerned, they believe no one should be allowed to operate a warship, much less an aircraft carrier, within their exclusive economic zone. There is no international law that China bases their political protest on, as maritime boundary definitions in the UNCLOS are defined as:

China’s criticism is expected – and they know that International Law only authorizes control of the sea out to the 12 nm limit. Beyond there all nations have the right of innocent passage – even it it’s a carrier battle group.

The press has been given access to Yeonpyeong island to see the damage done by North Korean artillery and it puts more pressure on the Governments of South Korea and the United States to do something in response.
“South Korea’s Kospi dropped 1.3%, Japan’s Nikkei Stock Average shed 0.4%, Hong Kong’s Hang Seng Index fell 0.8% and China’s Shanghai Composite declined 0.9%. Australia’s S&P/ASX 200 edged up 0.1%. Dow Jones Industrial Average futures were down 75 points in screen trade.” The Wall Street Journal  Asian markets are jittery but are in no way panicked. The US dollar is up against other currencies with the threat of war.
The Navy exercise in the Yellow Sea between the US and South Korea begins on Sunday. (Watch Fox News Sunday for great commentary on the situation) The unprovoked submarine attack on the Cheonan earlier in the year and now this latest incident has highlighted is a broad flaw in US policy. The patience of the region with the US government’s ineffective diplomatic solutions for North Korea has all but expired. Both South Korea and North Korea have stopped working with the Red Cross, which was the last link the two countries had before this latest incident. Japan is skeptical of our repeated inadequacies, Taiwan wonders if they’re next if we waffle on North Korea.
The US Navy will deploy a second carrier battle group to the area – but it won’t enter the Yellow Sea. It’s a show of resolve but there are teeth to back it up. Perhaps the US will deploy a computer virus the way it was suspected of doing in Iran a month ago. (LINK – STUXNET) The virus targeted the Iranian power plants… 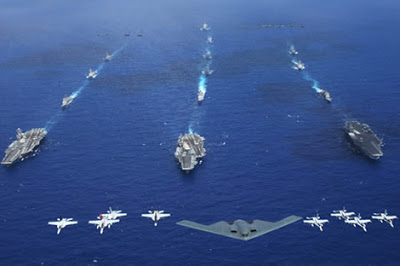 Peace — though superior firepower?
I do not advocate that the US engage in yet another land war in Asia. I don’t think that provoking a nuclear exchange involving the Korean Peninsula is in anyone’s best interests. China knows this most clearly.  The Obama Administration squandered what prestige the US had early in it’s existence, by showing itself as weak and indecisive. A perception of weakness, sadly, means that rogue states will become opportunistic. Now Barack Obama has a situation on his hands that nobody feels he has the skill sets to manage. One can only hope that talented staff people can lead him in the right direction and at the same time, muzzle Vice President Joe (Slow Joe) Biden.